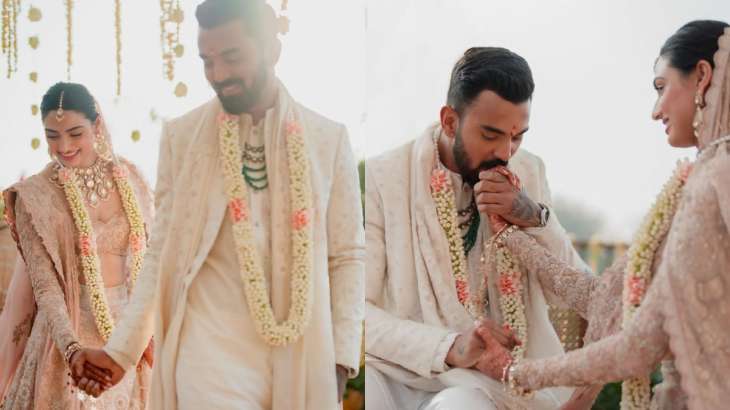 Athiya Shetty and KL Rahul wed in an intimate ceremony in Suniel Shetty’s lavish Khandala home on Monday, January 23. The couple tied the knot as per Mangalorean rituals and their private union was attended by close friends and family members including celebrities like Diana Penty, Anshula Kapoor, Krishna Shroff and Indian cricketers Varun Aaron and Ishant Sharma. After the wedding, both KL Rahul and Athiya posed for photographs and were all smiles and seemed lost in love.

Athiya Shetty looked pretty in an Anamika Khanna lehenga with chkankari work at her wedding ceremony. KL Rahul complemented the beautiful bride in cream-colored sherwani from Anamika Khanna. In one of the images, the couple looked lost in each other’s eyes with the beautiful sun in the background. Other photos show them performing wedding rituals and taking pheras. The newlyweds looked blissed out in the images that have taken the internet by storm. Athiya posted the pictures from her wedding on social media, writing, “In your light, I learn how to love. Today, with our most loved ones, we got married in the home that’s given us immense joy and serenity. With a heart full of gratitude and love, we seek your blessings on this journey of togetherness (sic).”

Read:  Athiya Shetty, KL Rahul are now married; Suniel Shetty says ‘like to be a father, not father-in-law’

Suniel Shetty had earlier promised the media that he would bring the couple after their marriage for a photo op. After the rituals, Suniel and his son Ahan distributed the sweets and thanked the media for their love and support. Suniel said that he would like to be a father to KL Rahul and not a father-in-law. Suniel and Ahan looked elated when they met the media outside the Khandala wedding venue.