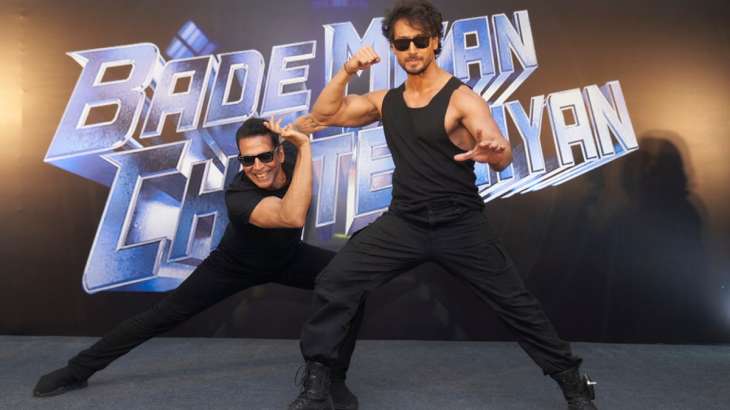 Akshay Kumar and Tiger Shroff were present at the mahurat of their upcoming action film Bade Miyan Chote Miyan. Even though there were reports circulating earlier that the movie has been put on the back burner, turns out that was not the case. The film will go on the floors soon. At the mahurat ceremony, joining Akshay and Tiger were director Ali Abbas Zafar and producer Jackky Bhagnani of Pooja Entertainment. The stars were seen all smiles at the mahurat ceremony of their upcoming film.

At the mahurat ceremony. Akshay Kumar and Tiger Shroff were seen in action avatars. Botha actors donned all-black looks. Akshay wore a black T-shirt with trousers and boots, while Toger complemented him in a tank top and cargo pants. In one of the images shared online by Akshay, they were seen doing kung fu gestures. Akshay poked fun at his co-star Tiger in the caption to his post as he wrote, “A film I’ve been most eager to start #BadeMiyanChoteMiyan! Adding to the adrenaline rush is my Chote   @iTIGERSHROFF Hey Chote, you better remember during the shoot that you were born the year I started my career (sic).”

Tiger responded in a similar manner and wrote, “Bade I may have been born the same year you were launched, but I am sure you can still kick and jump higher than me. And the journey of one of the biggest action spectacles begins today (sic).”

The movie marks the beginning of an action franchise. It is a follow-up to Amitabh Bachchan and Govinda’s 1998 hit comedy film Bade Miyan Chote Miyan, which was directed by David Dhawan. Malayalam cinema star Prithviraj Sukumaran is playing the antagonist opposite Akshay Kumar and Tiger Shroff. His look was revealed earlier by the makers. It will mark his entry into Bollywood.