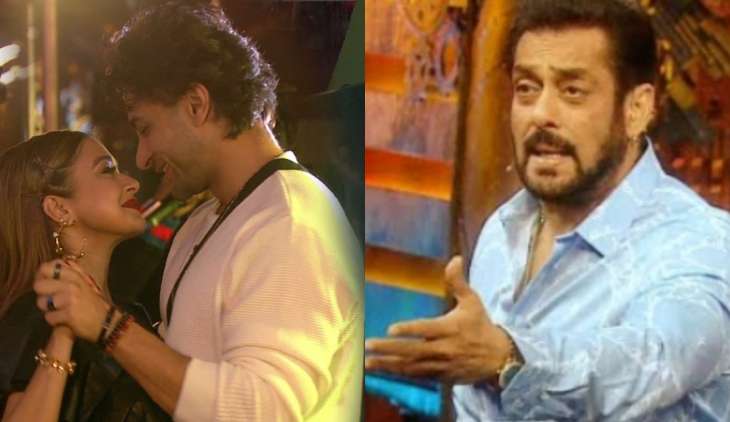 Bigg Boss 16: The Salman Khan-hosted reality show has been able to hold the audience’s interest with new twists and turns and fans are loving the non-stop drama, fight and love angles. Well, the much-talked contestants of Bigg Boss 16, Shalin Bhanot and Tina Dutta have been under the limelight ever since the show started. Be it their ‘fake’ relationship or the ugly spats both of them have become household names. However, the past few episodes were had moments filled with fights, love and confusions as housemates were not able to figure out what is actually brewing between Tina and Shalin. Now, Salman himself if here to solve this riddle.

In Shukravaar Ka Vaar, Salman Khan asks Tina, ‘what game was she paying and with whom?’ Baffled over this, she said “Sir I don’t act, I have told Shalin also that we cannot be together.” Salman states, “There is no consistency in your game, when you were weak you went with him and got strong you left him.”

Defending her equation with Shalin, Tina adds, “We can’t fall in love,” Salman says, “you fought, music played and you were sticking with him and dancing. There was nobody else to stick around or dance with, this relationship is fake”. Salman even does the gesture to show the way Shalin and Tina were dancing on the concert night, adding “aur koi nahi hai yahan chipakne ke liye.”

Next, Salman also confronted Archana Gautam and MC Stan for their ugly spat. Salman asked Stan to think what he said to Archana was right or wrong. Stan admits that he shouldn’t have passed such a comment. On the other hand, Salman also schooled Archana for her behaviour and says ‘that the doors are open and she can leave right away if she doesn’t want to behave properly.’

Bigg Boss 16 contestants celebrated New Year with much fun and dance as MC Stan’s live concert was announced. The rapper entertained everyone by performing live along with famous rappers Ikka and Seedhe Maut. Amid this, Tina Datta confessed her love for Shalin Bhanot while the duo was involved in a romantic dance.