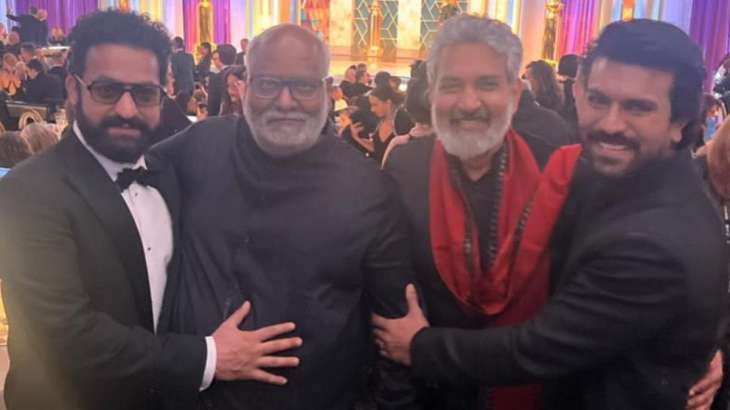 Golden Globes Awards 2023: As ‘Naatu Naatu’ from RRR was named the Best Original Song in Motion Picture category at the Golden Globes 2023, actor Ram Charan took to social media to express his excitement. The song has been composed by veteran music director MM Keeravaani and penned by Kala Bhairavi and Rahul Sipligunj. There to receive the award was Keeravaani, who found himself struggling to hold back tears as he took to the stage.

Other nominees in the segment were Taylor Swift’s “Carolina” (“Where The Crawdads Sing”), “Ciao Papa” (“Guillermo del Toro’s Pinocchio”), “Hold My Hand” from “Top Gun: Maverick”, a collaboration between Lady Gaga, BloodPop and Benjamin Rice, and “Lift Me Up” from “Black Panther: Wakanda Forever” by Tems, Rihanna, Ryan Coogler, and Ludwig Goransson.

While accepting the award at the 2023 Golden Globes, Keeravaani expressed gratitude for his team and also thanked N. T. Rama Rao Jr and Ram Charan for their performance on the song. “It’s been an age-old practice to say that this award actually belongs to someone else. So I was planning to not say those words when I get an award like this, but I’m sorry to say I’m going to repeat the tradition because I mean my words. Thank you very much for this prestigious award: This award belongs to SS Rajamouli for his vision, I thank him for constantly believed and supporting my work. Nt Rama Rao and Ram Charan who danced with full stamina.”

While it is a momentous day for India as RRR took home the trophy for Naatu Naatu. The film lost Golden Globe Award to Argentina 1985 in Best Non-English Language Film category. The winning film is a historical drama produced and directed by Santiago Mitre and written by Mitre and Mariano Llinás. It stars Ricardo Darín, Peter Lanzani, Alejandra Flechner and Norman Briski.