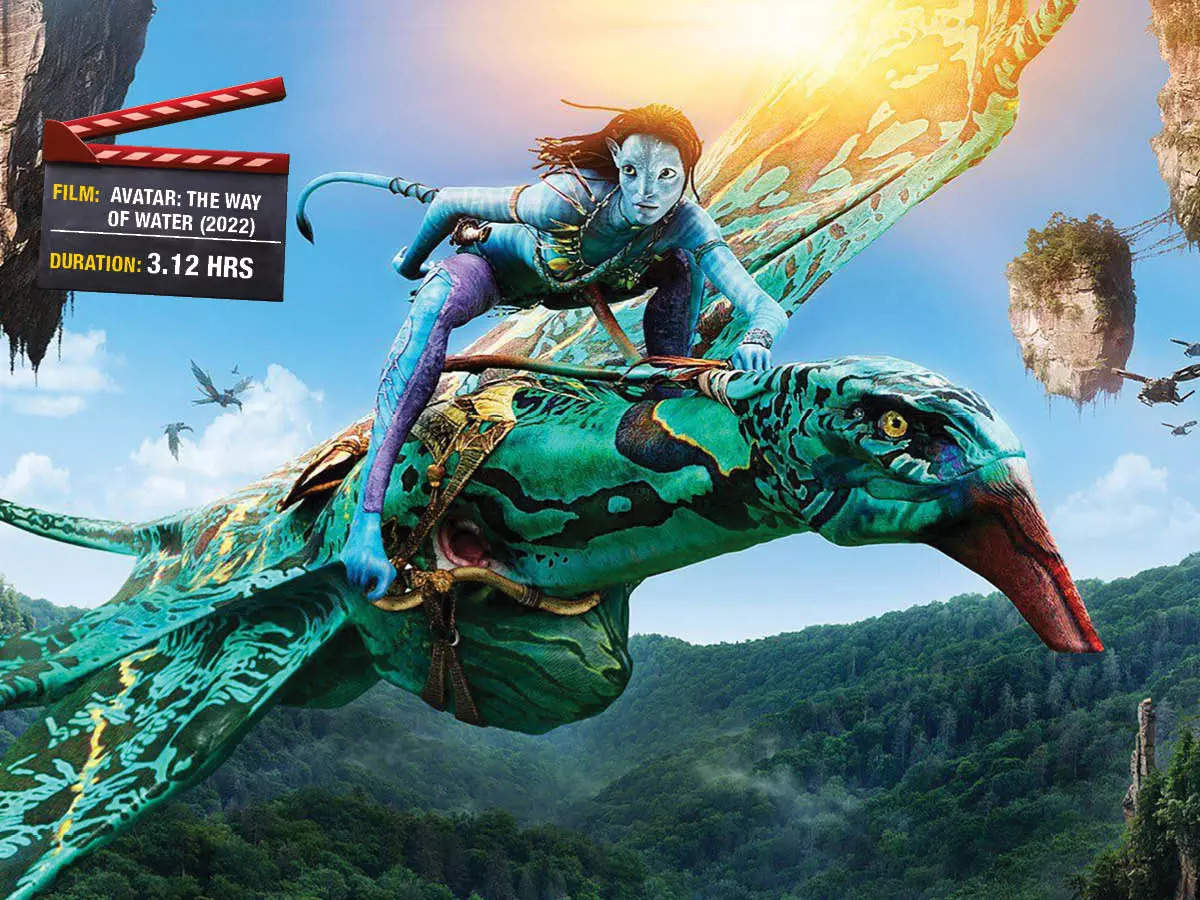 The interval – often cursed by the desi audience and ignored by Western cinema – might actually benefit not just our bladders, but a film’s story too

James Cameron’s Avatar: The Way Of Water is a long film – three hours and 12 minutes long, to be precise. And the director doesn’t want anyone whining about it, especially since most people now binge-watch shows for several hours at a time. His statement has sparked another round of discussions on whether cinemas in the US – and other countries which do not have intermissions – should include one. Closer home, intervals are a norm and have been argued to be both, a convenience and irritant. However, intervals aren’t necessarily just bathroom breaks. Apart from relief, they also give one time to think and regroup. In fact, many Hindi film writers considered them essential to a film’s story structure and used them as an element to add intrigue. Here’s a case for why intervals may not necessarily be the worst thing in the world. 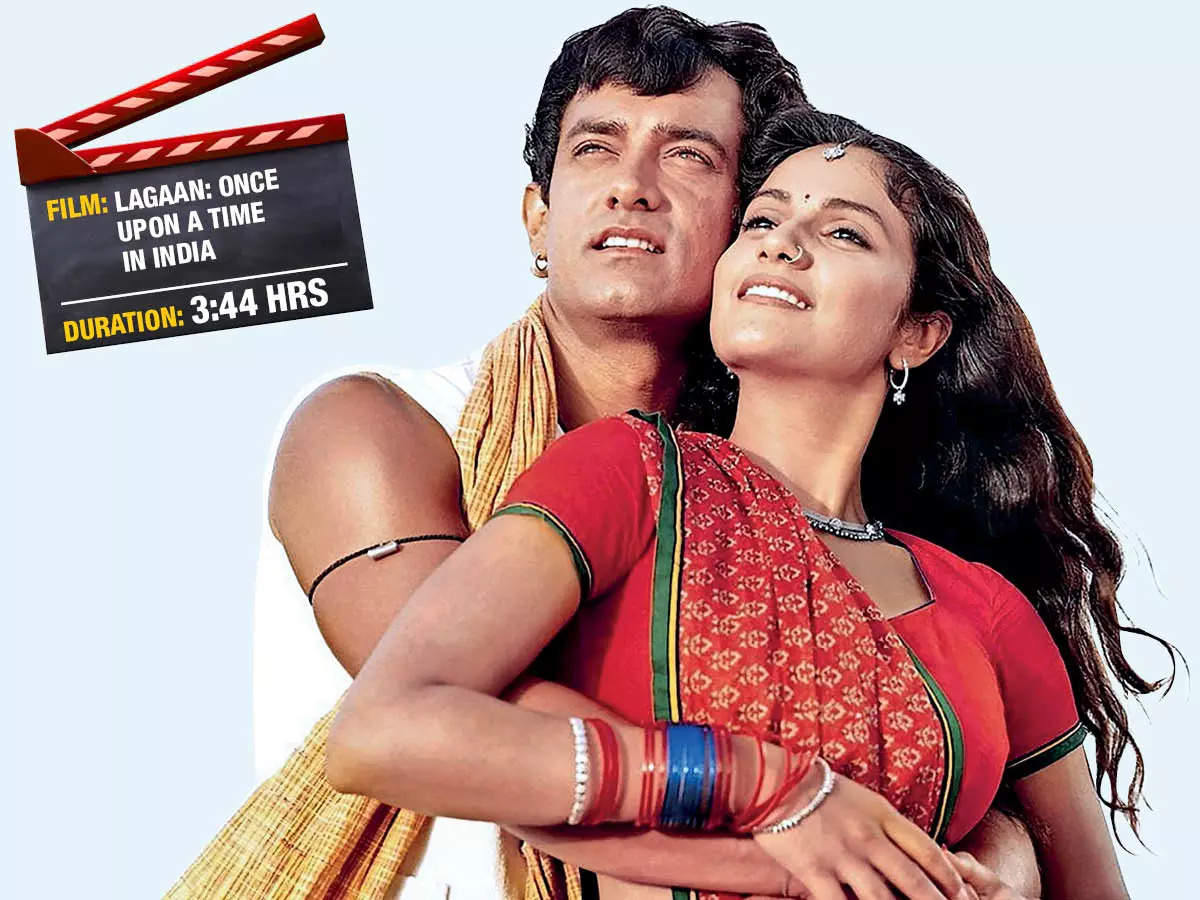 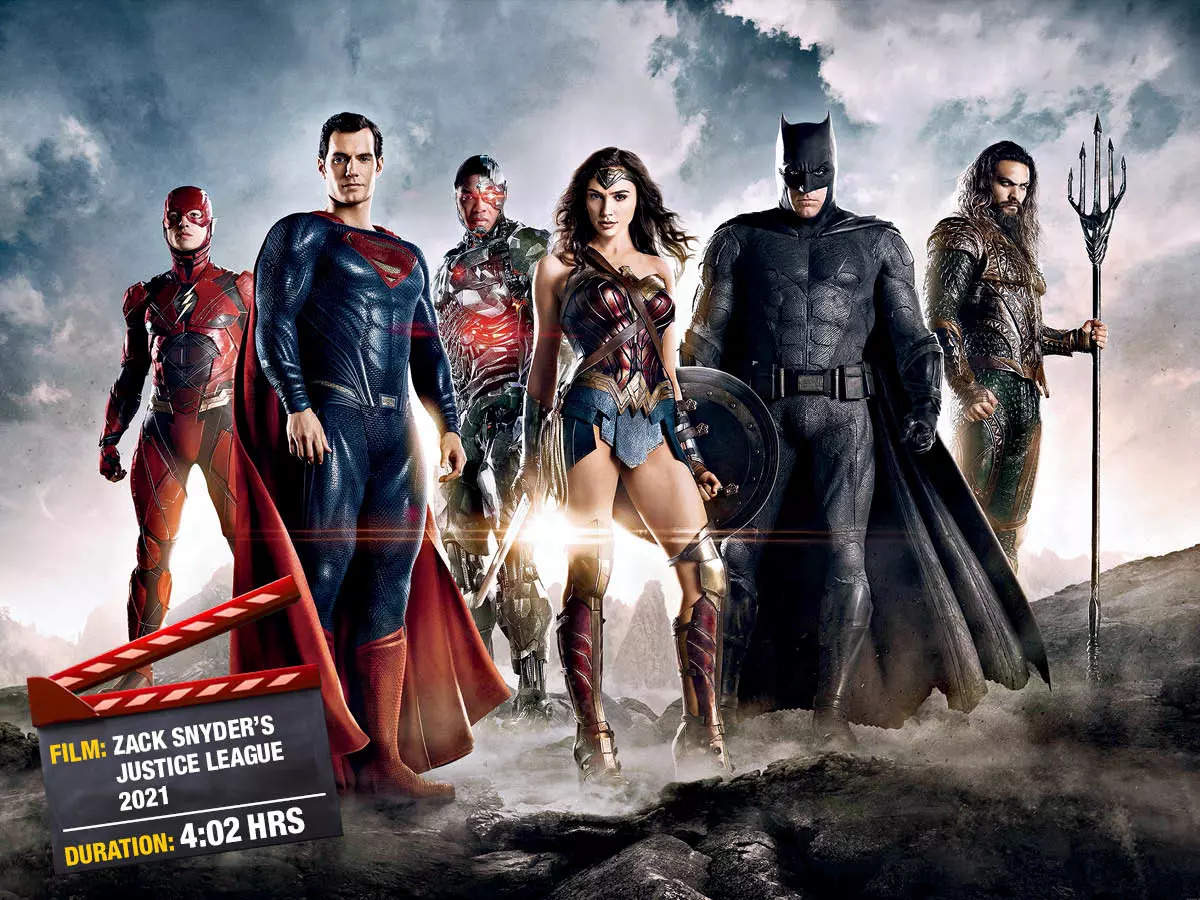 ‘Intervals were common in Hollywood till the ’70s’

Film historian Gautam Chintamani says, “Even in foreign countries, earlier cinema had intervals because the projectionist would take time to change reels. Later, they started allowing patrons to get food, snacks, etc. From Ben-Hur (1959) to Lawrence Of Arabia (1962) – all of them had built-in intervals, because epic genre films are of longer durations.” Similarly, 2001: A Space Odyssey (1968) has a title card at the two-hour point, that reads, ‘Before the next pose, a five-minute intermission’. 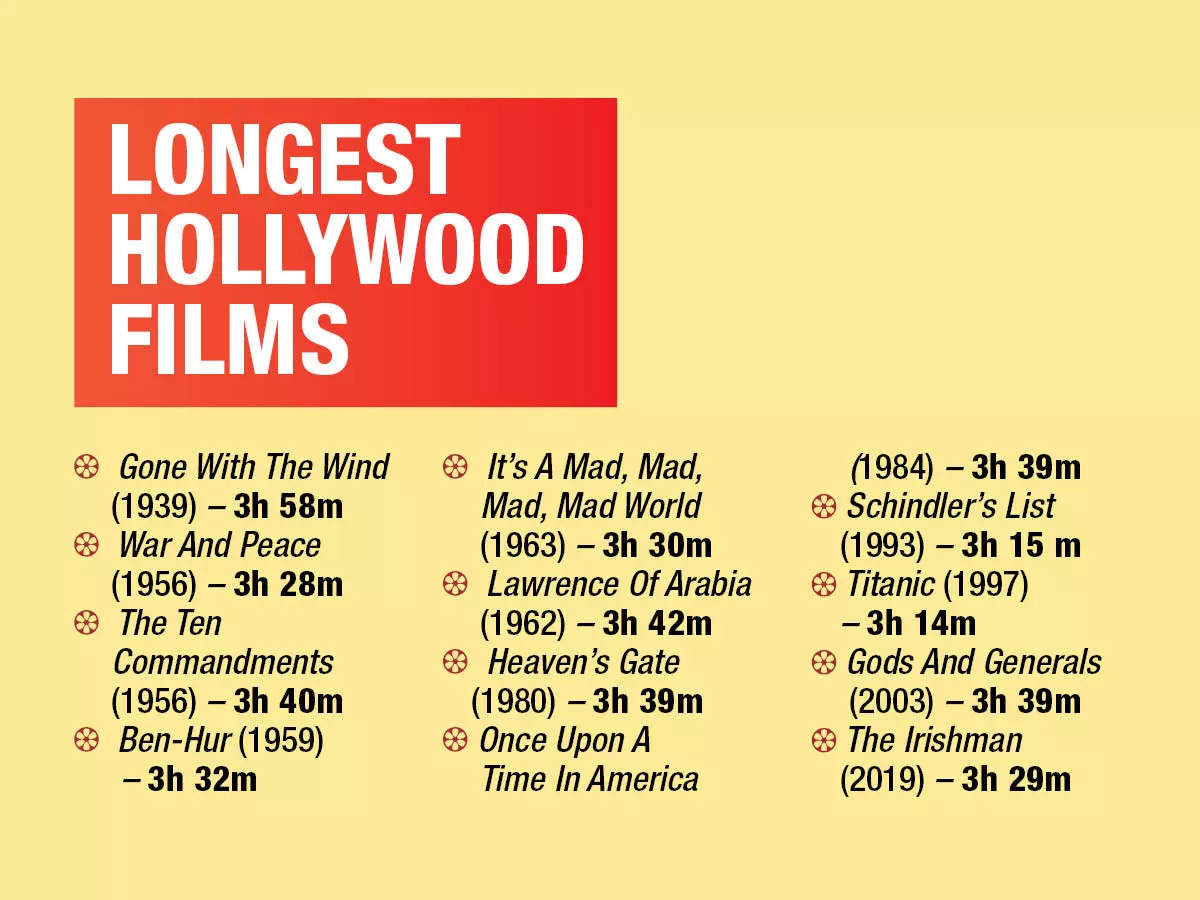 Chintamani adds, “Till the 1970s, intermissions were common in Hollywood. Seven Samurai and Sound Of Music had one too. Most of Quentin Tarantino’s films are longer than average, clocking in at roughly 1.2-1.5 hours. And the reason for this is that Tarantino follows South Asian cinema closely. Kill Bill was over four hours long, and in such cases, it is not a bad idea to include an interval. Alfred Hitchcock famously said the length of a film should be directly related to the endurance of the human bladder.” 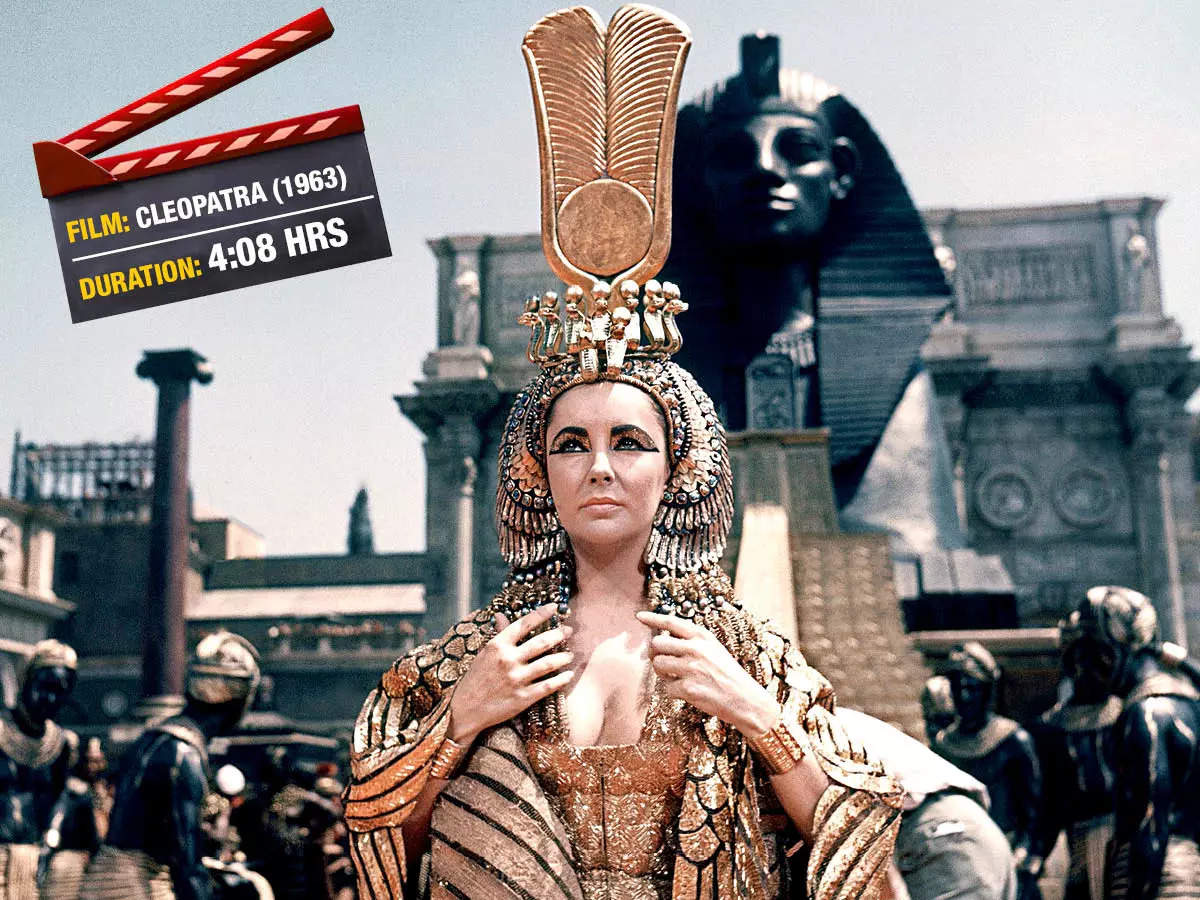 ‘Interval was built into Bollywood stories’

Filmmaker and archivist Shivendra Singh Dungarpur says, “Intervals in Hindi films were a legacy of Parsi theatre, which used to be long. Intervals gave relief, and were for rethinking, and regrouping. It also gave them an opportunity to sell song booklets. Writers like Salim-Javed and Gulzar used to write the movies keeping in mind that ‘interval point
kya hoga?’ Films such as Gumnaam or Don had intervals designed to intrigue the audience. Cinema was community-driven, and writers and directors wanted people to go out during the interval and discuss the film. Several writers told me that they used to think of three points while writing the films– the beginning, interval and climax. In India, we have always discussed films as – Interval
tak to hold kar raha hai? Interval
ke baad kaisa hai?” 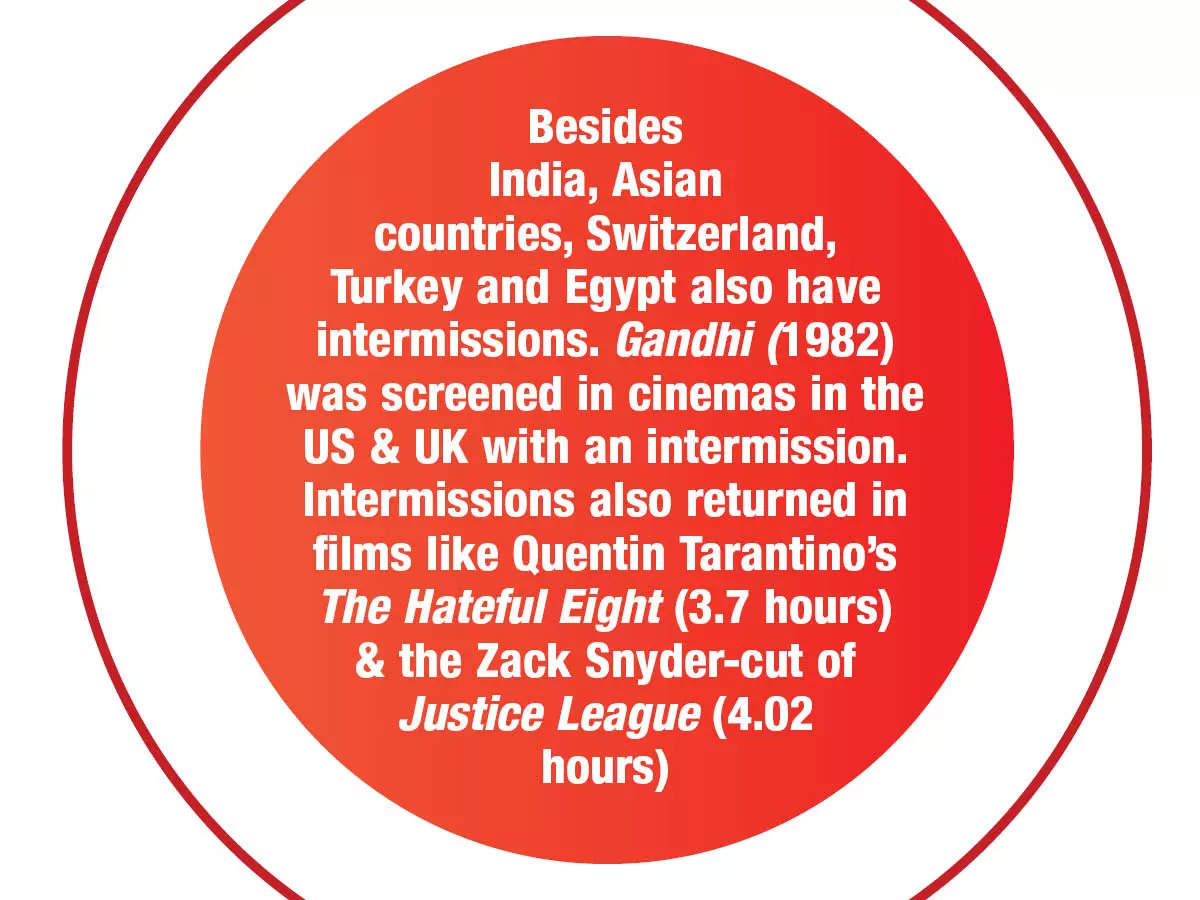 The West is not entirely averse to reintroducing intermissions – and in fact, feel it could elevate Hollywood storytelling, too. Arguing the case for intervals, a report published by The Guardian said, “Intermissions could lend a sense of occasion and ceremony to today’s cold-eyed franchise lineup and subtly link back to a more genteel era of filmmaking. This would come at no extra cost – and indeed the extended pause would help boost the snack sales that already deliver the fattest profit margins… If intermissions were a regular feature, it might force studios to think more about structure again – to carefully modulate the rhythm of their screenplay around the pause, and see what cliffhanger, or other dramatic effect, they could spirit up.” 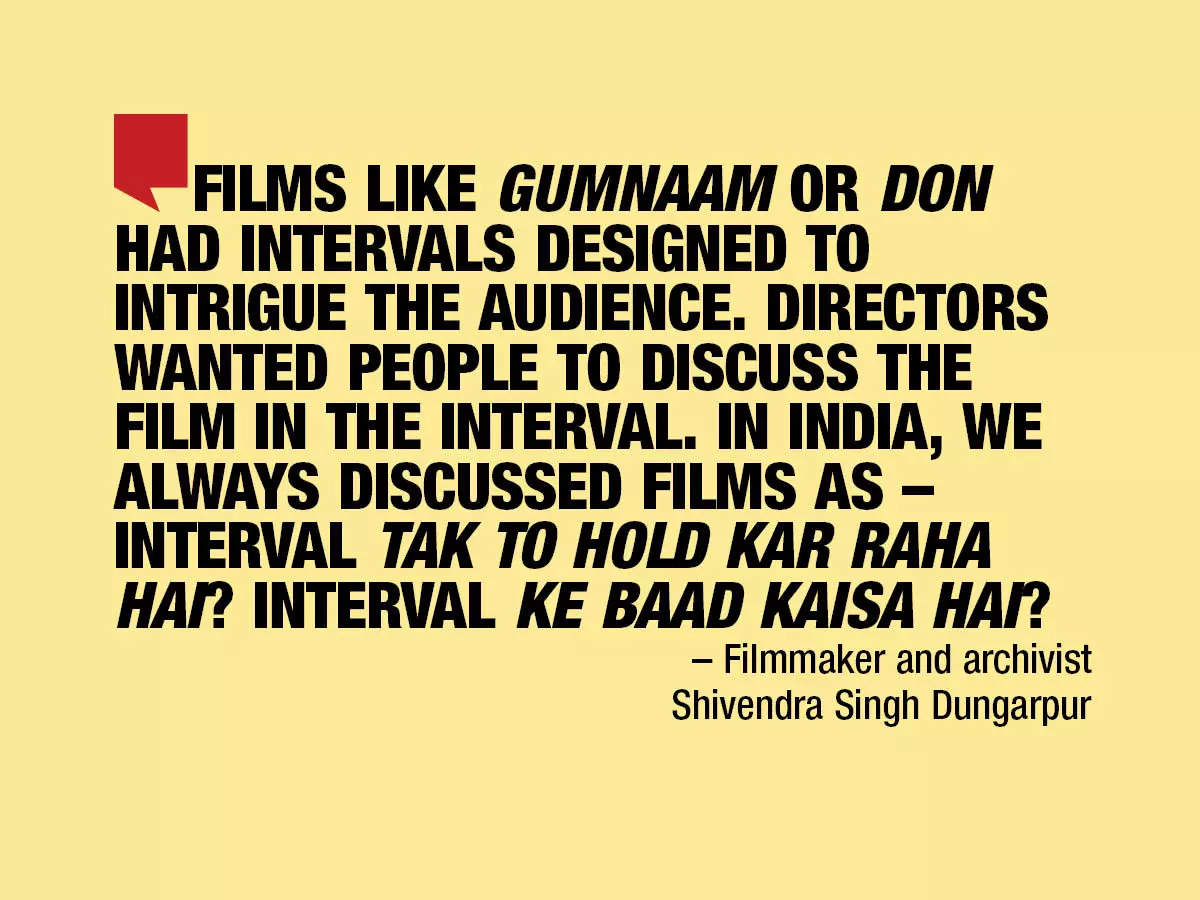 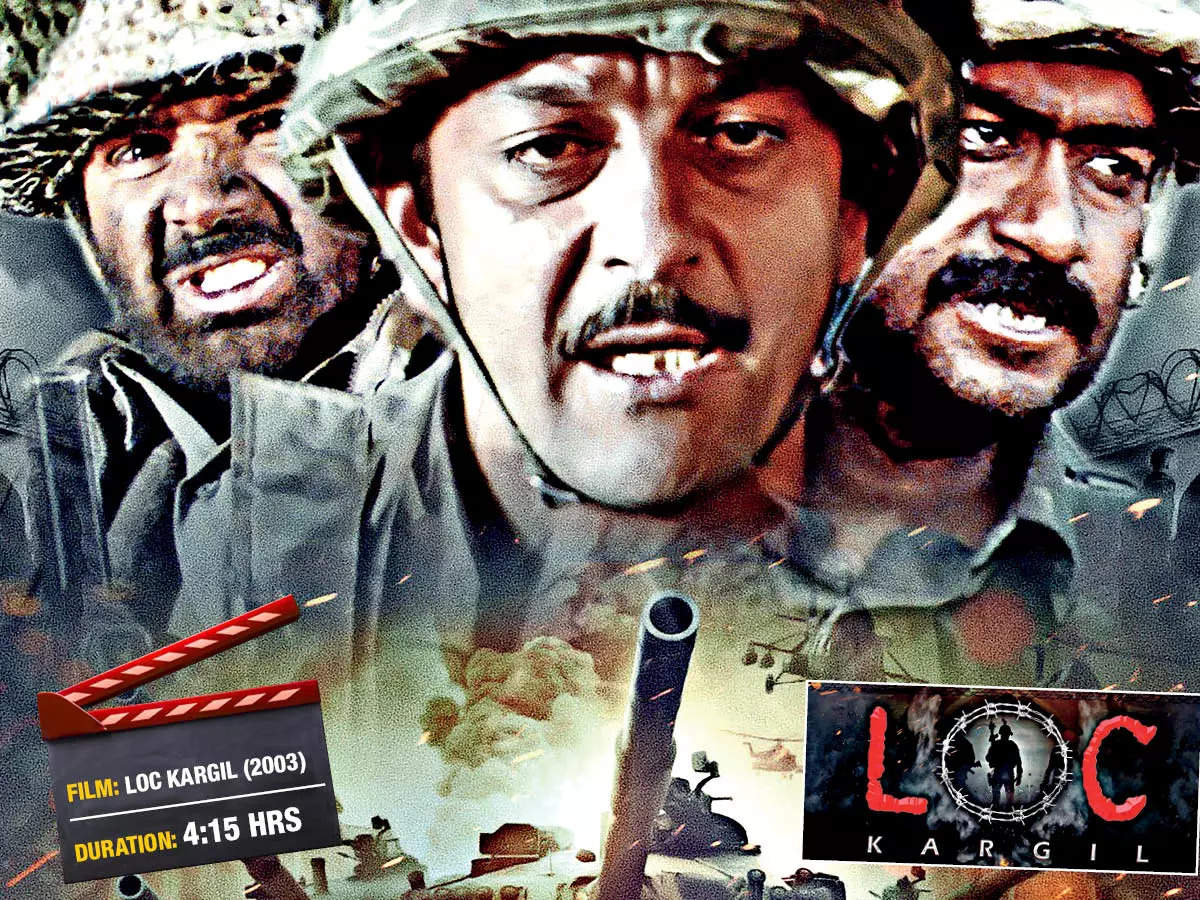 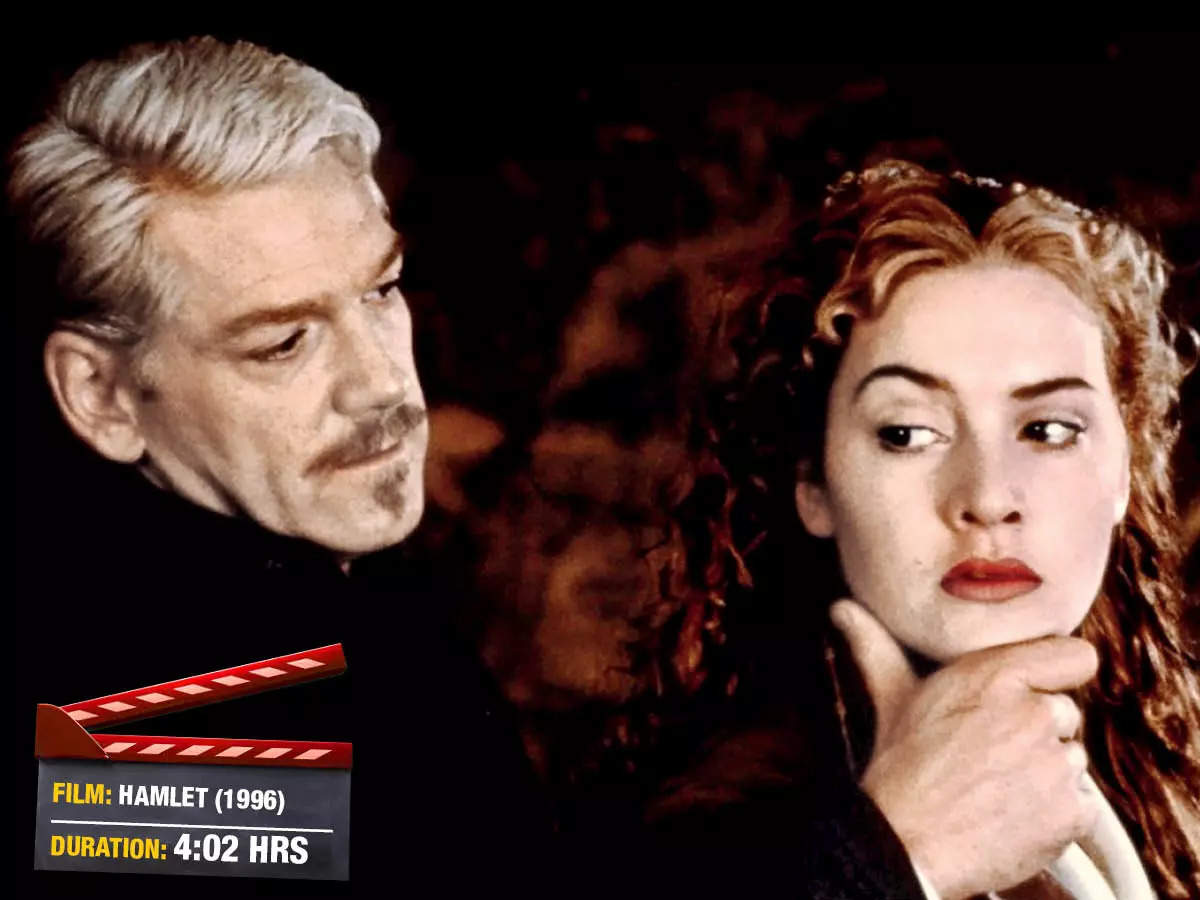 Indian cinegoers often complain about abrupt and jarring intervals that are added in Hollywood movies being screened here. Because the break is added at a midway point in the film, it often comes in the middle of an important sequence and breaks the flow. Three years ago, when 1917 was released, one of its key features was that it was filmed to look like a single shot. Back then, filmmaker Vikramaditya Motwane had tweeted an appeal to Indian cinema halls to screen the film without an interval, in order to not ruin the movie-watching experience. But of course, that didn’t happen. Cinema halls are reluctant to do away with the interval as the biggest chunk of their profits is from F&B sales and not tickets sale. 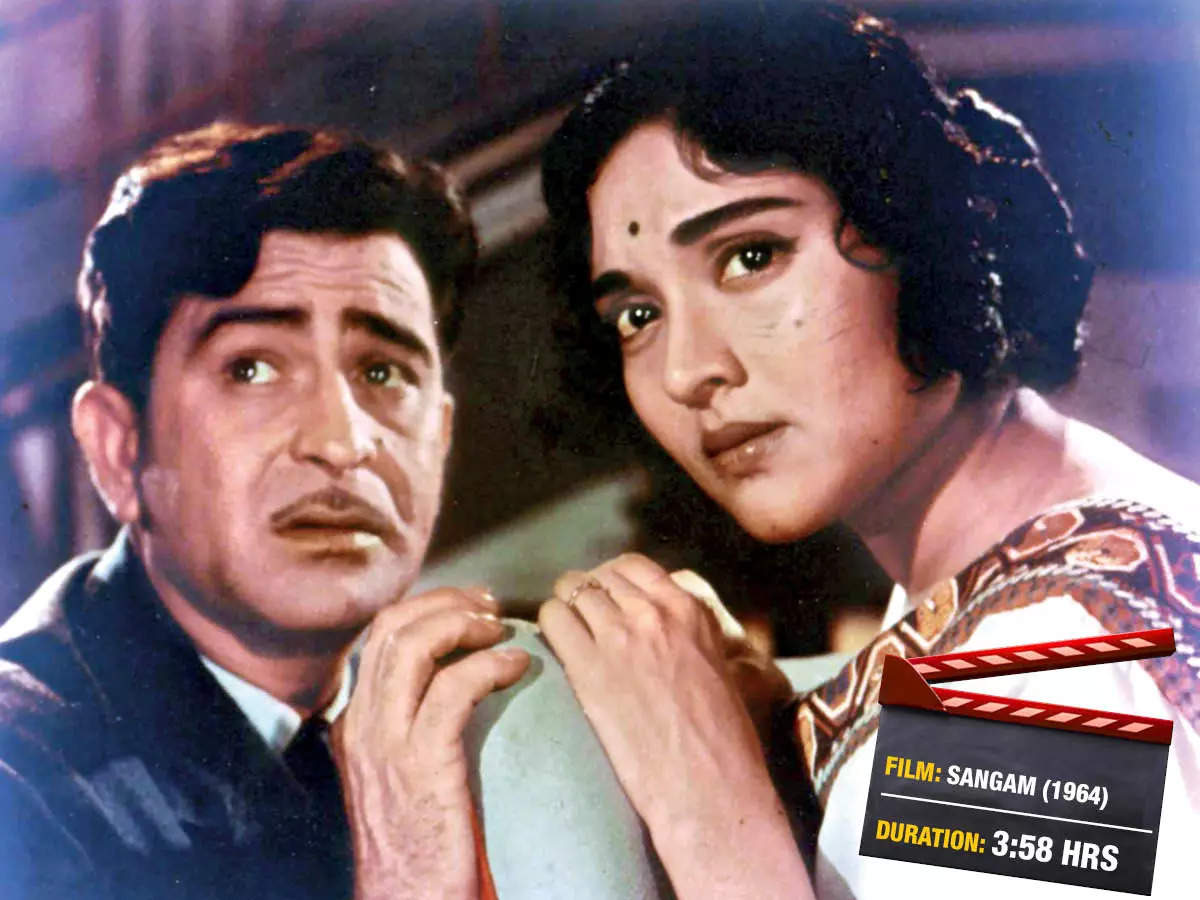 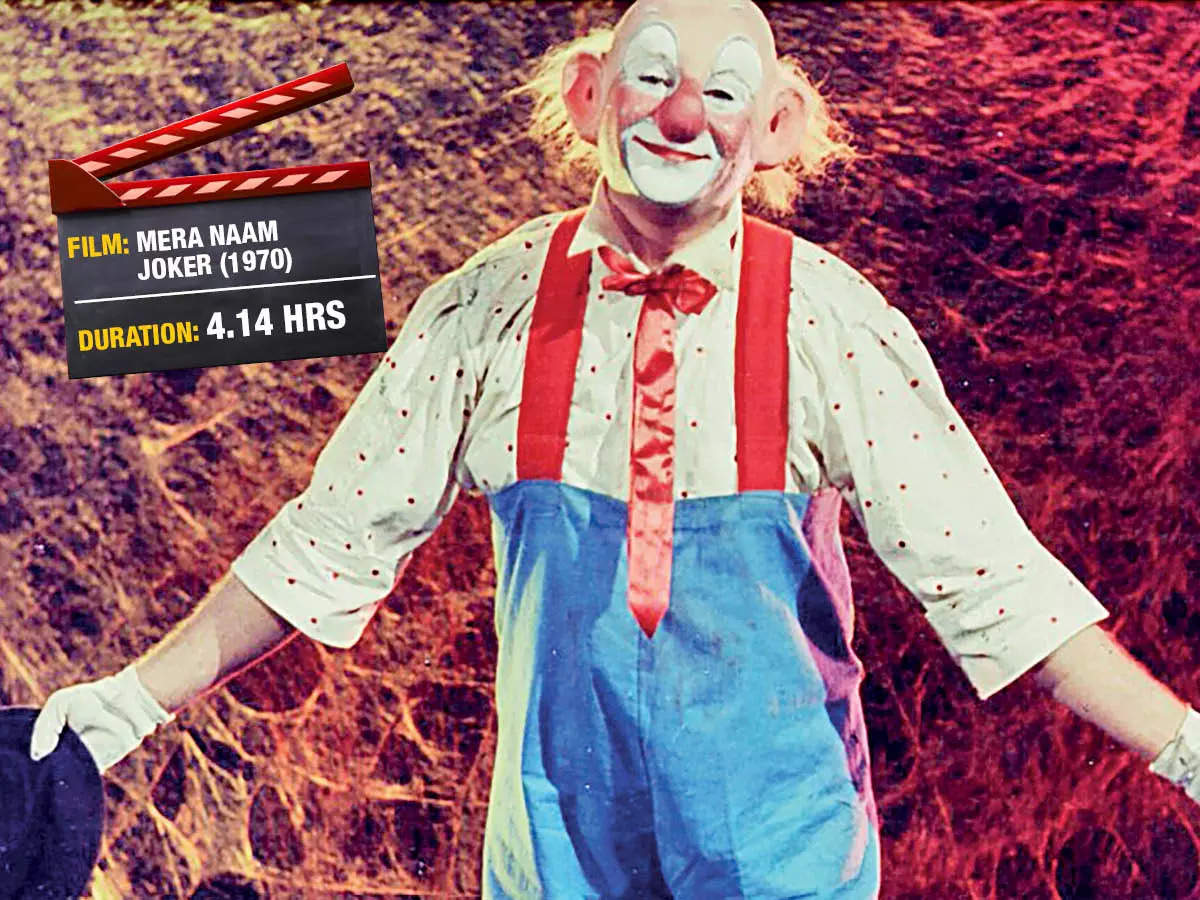