Kartik Aaryan on Aap Ki Adalat: Why Karan Johar dropped him from Dostana 2? Actor reveals for the FIRST time 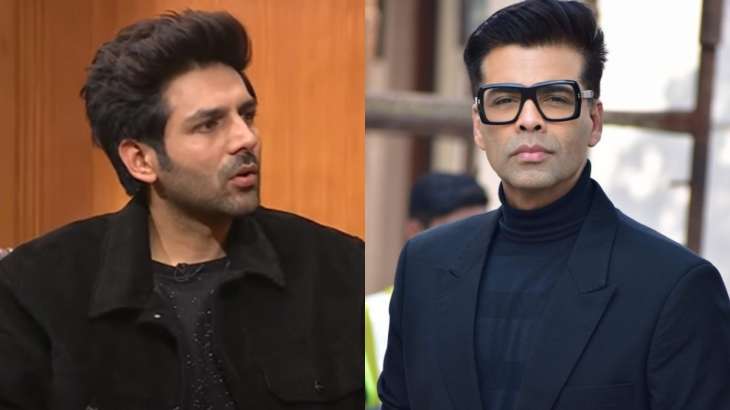 Kartik Aaryan on Aap Ki Adalat: It was touted as the collaboration of the year when Karan Johar announced Dostana 2 with Kartik Aaryan and Janhvi Kapoor. Before the COVID lockdown, the film went on floors and the actors had begun shooting. However, things did not pan out as planned. The pandemic happened and apparently, there was a fallout between the actor and the filmmaker that led to Kartik’s exit from the film. Rumours about Kartik being unprofessional went rampant in no time. While the actor has refrained from talking on the subject, on Aap Ki Adalat, for the first time, he spoke about it at length.

As Kartik Aaryan sat in India TV Editor-in-Chief and Chairman Rajat Sharma’s witness box on Aap Ki Adalat, without beating around the bush, the actor was asked what happened between him and the filmmaker. When asked why Karan Johar dropped Kartik Aaryan from his film, the actor said, “This happens sometimes. I haven’t spoken about this before.” “I believe in what my mother has taught me and these are my value too… when there’s an altercation between two people, the younger one should never speak about it. I follow that and hence I never speak about it,” he added.

When probed further saying that it was alleged that Kartik Aaryan demanded more money for the film and when he was denied, he refused to go ahead with the movie, the actor shared some more details. “This is like Chinese whispers, a make belief story,” Kartik quipped adding, “I have never left a film because of money. I am very greedy, but in terms of script and not money.”

So, did the fallout happen because the script changed? Denying this, Kartik explained, “Pandemic happened, there was a gap of 1.5 years and there were some pre-planned changes in the script which couldn’t happen.”

Seems like Kartik and Karan have buried the hatchet. Recently, when the trailer of Kartik’s upcoming film Shehzaada was released, KJo gave the actor a shoutout and praised him on Instagram.