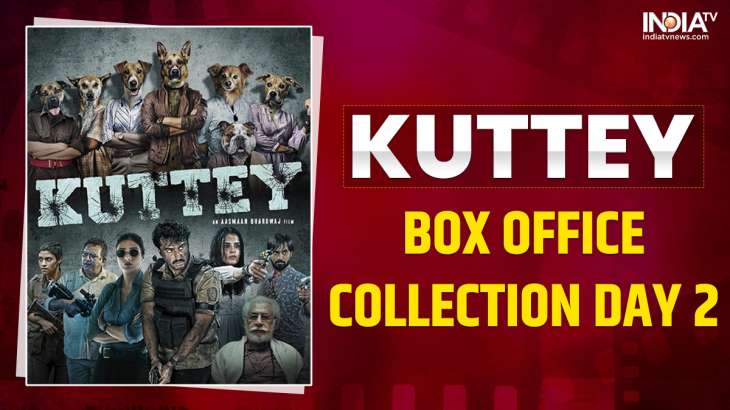 Kuttey Box Office Collection Day 2: Arjun Kapoor’s film had a dismal start at the box office. The only earned Rs 1 Cr on its opening day and it did show any improvements on day 2. The film is struggling to gain an audience and the reviews aren’t working in the film’s favour. If the film doesn’t have a surprise growth, it wouldn’t be able to earn Rs 5 Cr at the ticket window in its opening weekend.

Kuttey had an underwhelming performance on its first day at the box office. It has earned Rs 1.07 Cr India nete. On it’s second day, early estimates suggest that the Arjun Kapoor starter minted only Rs 1.25 Cr nett. Box Office India reported that the film needs a big jump to sustain itself. “There will be an upward trend for the film on Saturday but unless its more than double its not likley to help much in the long run as the core mass audience will slam the door on the film on Sunday,” the report stated.

“Sabke sab kuttey hai saale!” Arjun Kapoor says sarcastically and sets the tone for a rollercoaster ride with this thrilling, raw and earthy trailer, tinged with dark humour. Starring Arjun, Tabu, Naseeruddin Shah, Konkona Sensharma, Radhika Madan, Kumud Mishra, the seven grey-shaded characters appear to reflect what they will portray in the movie. In the film, Arjun turned on his action mode as he and Tabu play a cop and an investigating officer. On the other hand, Naseeruddin Shah is essaying the role of a gangster.

Interestingly, Vishal Bhardwaj, who composed it (and directed Kaminey), has also composed the music for Kuttey and recreated the Kaminey title track in Aasmaan’s movie.