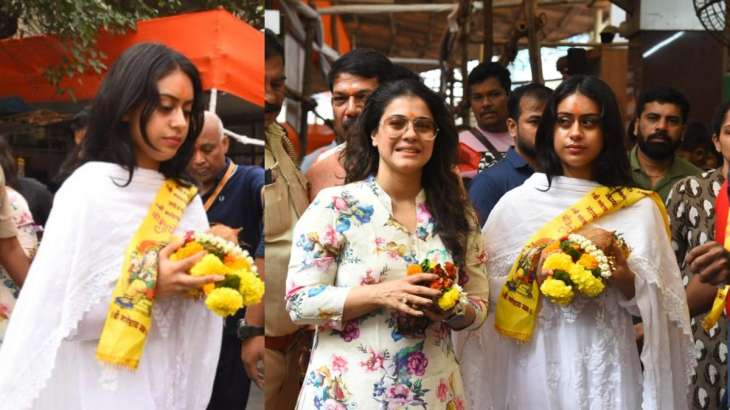 Nysa Devgan has been in news lately for her fashionable outings. The star kid is often spotted partying with her friends and at Bollywood get-togethers. From her rumoured boyfriends to her fashion statements and her videos at parties, Nysa always manages to turn heads. Likewise, on Sunday when she stepped out with her mom Kajol to pay a visit to Siddhi Vinayak Temple in Mumbai, photos and videos of the mother-daughter duo instantly went viral on social media.

Netizens lined up in the comment section to react to the videos and photos. There were many who trolled Nysa. “Poo bani parvati,” wrote a user under a video posted by celebrity photographer Viral Bhayani. Another said, “Acha ye log mandir bhi chalte hai kya hume laga sirf pubs pe chelte hai.” A few others called it a PR strategy.

Some also posted to defend her choices. “I don’t understand the point of trolling. People wear western dresses in pubs and parties. That doesn’t mean they cannot be religious and cannot visit temples,” wrote an Instagram user. some also said they are waiting for Nysa to make her Bollywood debut.

Nysa is the daughter of Bollywood actors Ajay Devgn and Kajol. The couple welcomed her on 19 April 2003. She was in Singapore for higher studies. Nysa Devgn turned 19 last year in April. Given her popularity, fans have been curious to know to she will enter Bollywood. Questions about the same have often been asked to her parents. In an interview with Film Companion, Ajay Devgn revealed Nysa has no plans to venture into Bollywood. He said, “I don’t know if she wants to come into this line. To this moment she has shown disinterest. Anything can change anytime with children. She is abroad. She is studying right now.”