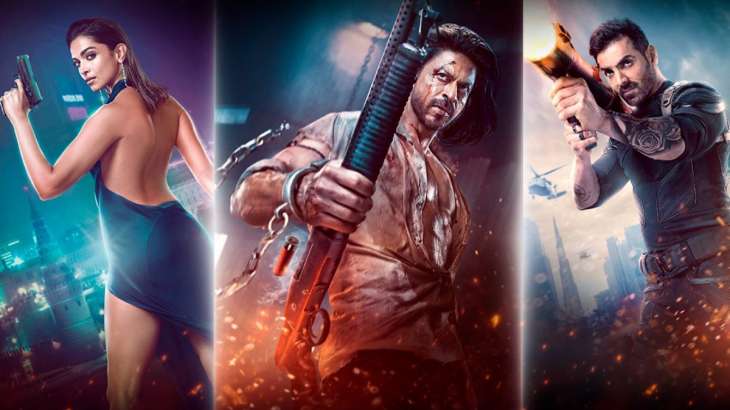 Pathaan trailer OUT: Finally the much-awaited update of Shah Rukh Khan and Deepika Padukone’s upcoming actioner is here! The makers of the film have unveiled the trailer of Pathaan. Taking to his official social media handles, SRK shared the trailer and wrote, “Mehemaan nawaazi ke liye #Pathaan aa raha hai, aur pataakhen bhi saath laa raha hai! #PathaanTrailer out now! Releasing in Hindi, Tamil and Telugu on 25th January 2023.” Helmed by Siddharth Anand, the film co-starring John Abraham is all set to hit the theatres on January 25, 2023, in Hindi, Tamil and Telugu.

Shah Rukh, who will be returning to the leading role after a gap of four years went all out in Pathaan. Loaded with action, bloodshed and SRK’s charisma, the Pathaan video has increased the anticipation for the upcoming Bollywood movie. SRK’s seeti maar patriotic dialogues, chiselled physique with drool-worthy abs, action sequences are too hot to handle.

Pathaan was recently reviewed by the CBFC examination committee for certification. Following this, the Central Board of Film Certification directed the makers to implement ‘changes’ in the movie, including its songs, chairperson Prasoon Joshi said. However, he did not detail the changes suggested to the makers. The film found itself battling controversy and calls for a ban after the release of its song ‘Besharam Rang’, also featuring Deepika on December 12. A sequence in the song showing the actress in a saffron bikini led to protests across India for allegedly hurting “Hindu sentiments”.

Right-wing organisations as well as the BJP have called for a boycott of the movie, objecting to the “saffron” and “green” outfits being used in the song that features Shah Rukh and Deepika Padukone.

In Pathaan, Shah Rukh portrays a gun-toting spy with a license to kill in the action-thriller film. The visually spectacular Yash Raj Films’ action extravaganza, Pathaan, is part of Aditya Chopra’s ambitious spy universe. According to reports, the upcoming film revolves around a RAW Agent codenamed Pathaan, who takes on an ominous villain who is hell-bent on ripping apart India’s security apparatus. The movie also features a cameo from Salman Khan.