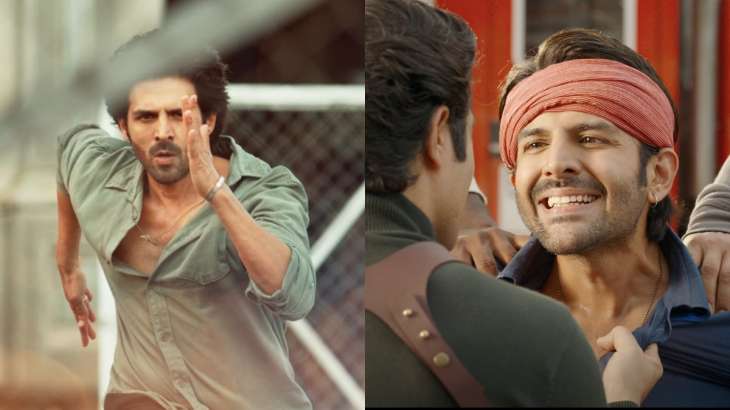 Shehzada Trailer OUT: The trailer of Kartik Aaryan and Kriti Sanon’s much-awaited film is here! Helmed by Rohit Dhawan the film also starring Manisha Koirala, Paresh Rawal, Ronit Roy, and Sachin Khedekar in pivotal roles, is all set to hit the theatres on February 10, 2023. Shehzada is an official Hindi remake of the 2020 Telugu film ‘Ala Vaikunthapurramloo’ which starred actor Allu Arjun in the lead role. The trailer sees the ‘Bhool Bhulaiyaa’ actor effortlessly stepping into the shoe of an action hero without leaving his stellar comic timings.

Dropping the trailer, Kartik wrote, “Shehzada Aa Raha Hai 10th Feb Only In Theatres #RohitDhawan @KartikAaryan @KritiSanon @iPritamOfficial #BhushanKumar #KrishanKumar #AlluAravind #SRadhaKrishna @AmanTheGill@M_Koirala #PareshRawal @RonitBoseRoy @SachinSKhedekar #Trivikram.” In Shehzaada the 32-year-old actor, portrays the character of ‘Bantu’. In the video, it comes to the fore that while he actually belongs to a rich family, he has been raised by a middle-class family.

Apart from this, Kartik was recently seen in the romantic thriller ‘Freddy’ opposite Alaya F. The film, which premiered on Disney+ Hotstar, drew rave reviews while Aaryan also earned wholesome praise for his performance. Next, he will be seen in a romantic musical, ‘Satyaprem Ki Katha’, alongside Kiara Advani. The film is all set to hit the theatres on June 29, this year. He also has Kabir Khan’s next untitled film and Hansal Mehta’s ‘Captain India’ in his kitty.