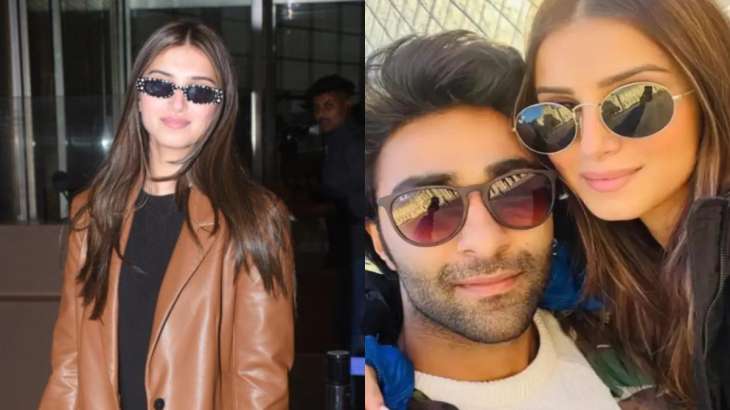 Tara Sutaria and Aadar Jain, who had been dating for a few years, have reportedly parted ways. This comes as a shock to fans, as the two were said to be getting engaged shortly. While Tara and Aadar have been mum on the topic, the actress was recently spotted at the airport, where she was questioned about the matter by paparazzi. The big question was subtly ignored by the Student of the Year 2 actress. The video is doing the rounds on the internet.

On January 4, Tara was spotted at the airport departure and she happily posed for the paparazzi. While taking pictures of her, paparazzi questioned Tara about the accuracy of recent articles regarding her breakup with Aadar. The actress initially asked paps to repeat the question; after correctly hearing it, she ignored it and entered the airport.

The video garnered several reactions from netizens. One user wrote, “She didn’t answer.” Another user commented, “She smartly ignored that, which means they are not together.”

Earlier, in a media interview, Tara had opened up about Aadar and her equation. She had said, “There are many who constantly tell actors to be hushed about our relationships, but I see absolutely no reason to do that. I don’t believe there is anything to hide when you are proud of something or someone, and I am happy to speak about my partner Aadar. The past year has been hard for everyone. We have had so many lockdowns, restrictions, and one couldn’t step out. But these are the times that reveal one’s genuine friendships and, quite frankly, the ones that have lasted through this time are the ones that will be taken forward.”

Meanwhile, on the work front, Aadar Jain was last seen in the Amazon Prime film Hello Charlie, alongside Jackie Shroff, Shhloka Pandit and Elnaaz Norouzi. Produced by Excel Entertainment, the film failed to impress the audience. Tara, on the other hand, made her debut with Karan Johar’s ‘Student of the Year 2’ in the year 2019 alongside Ananya Panday. She was last seen in Ek Villain Returns. The actress was paired opposite Arjun Kapoor in the Mohit Suri directorial. Next, Tara will be seen in Nikhil Nagesh Bhat’s directed Apurva.

Also Read: The Conjuring 4 to be the last in the horror franchise? Director shares his thoughts