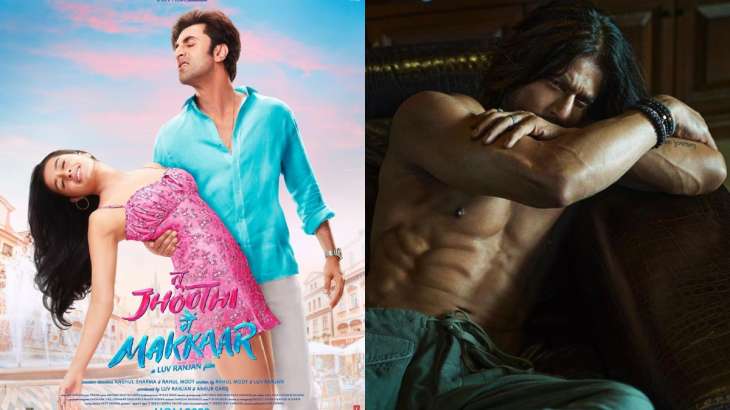 The trailer of the Ranbir Kapoor-Shraddha Kapoor-starrer ‘Tu Jhoothi Main Makkaar’ will be released in theatres with Shah Rukh Khan’s ‘Pathaan’.

The upcoming film is directed by Luv Ranjan, who is known for his movies such as ‘Pyaar Ka Punchnama’ and ‘Sonu Ke Titu Ki Sweety’.

In the poster of the film, Ranbir can be seen holding Shraddha in his arms. It is a rom-com and the grapevine has it that this trailer will be attached to Pathaan by YRF, who are distributing both films.

Ranbir is also occupied with his next film ‘Animal’. He is right now enjoying his fatherhood and he is often spotted with his wife Alia Bhatt.

Unlike ‘Animal’ which is a gangster drama, his film ‘Tu Jhoothi Main Makkaar’ is for all age groups.

Ealier, the teaser of Luv Ranjan’s TJMM was released. It shows Shraddha and Ranbir, deeply in love, walking towards each other at Gurugram’s CyberHub. Sharing the news, Shraddha took to her social media and wrote, “And the title is…… Finally Here !!! Dekhoooo.”

The 42-second video gives a glimpse into the quirky world of ‘Tu Jhoothi Main Makkaar’ starring Ranbir and Shraddha, who have also lent their voice to the title song. The film will be released theatrically on Holi 2023. The excitement around the movie has been immense since it went on floors. with the title and teaser, the expectations are running high.

‘Tu Jhoothi Main Makkaar’ is directed by Luv Ranjan, produced by Luv Films’ Luv Ranjan and Ankur Garg, presented by T- Series’ Gulshan Kumar and Bhushan Kumar. It is all set to release worldwide in cinemas on Holi 2023.