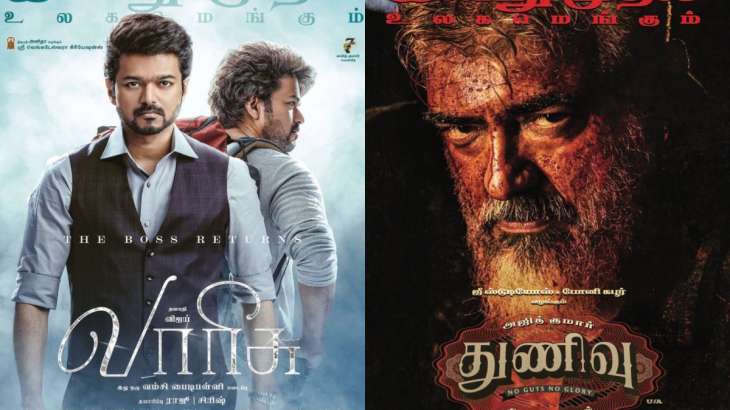 Varisu vs Thunivu: The Greater Chennai Police resorted to caning early Wednesday after the fans of actors Vijay and Ajith turned violent by tearing the posters of ‘Varisu’ of Vijay and ‘Thunivu’ of Ajith. Both the movies were released this morning and a heavy rush was witnessed in all the theaters across the state. In Chennai, police took into custody a few unruly people.

Notably, in 2014, Vijay and Ajith had releases on the same day with ‘Veeram’ of Ajith clashing with ‘Jilla’ of Vijay. The present release is after nine long years and hence the fans were exuberant on the release of the movies of their favourite stars.

Heavy rush is being witnessed at all the important locations of the state. With the Pongal festival taking place between January 15 and 18, the police department is keeping a close vigil across the state to prevent any untoward incident during the movie shows.

Varisu is a story of a man who is the son of a business tycoon. He is forced to take over his father’s empire under some unfavorable circumstances. The film is jointly scripted by director Vamshi Paidipally, Hari, and Ashishor Solomon. Rashmika Mandanna appeared as the female lead opposite Vijay. Besides them, it also boasts a stellar supporting cast, including R Sarath Kumar, Prakash Raj, Jayasudha, Khushbu, Srikanth, Shaam, Yogi Babu, and Sangeetha Krish. Producer Dil Raju has backed the film under his banner of Sri Venkateswara Creations. S Thaman has composed music for the film.

The action thriller has Ajith Kumar playing a slightly negative character, and he impressed the fans with it. Manju Warrier, the Malayalam cinema star, essays the female lead, while Samuthirakani, John Kokken, Veeran, Ajay, and GM Sundar appear in crucial roles. After the success of his last two films with H Vinoth, Ajith returns with him once again with a promising film. Ghibran scored music for Ajith for the first time in Thunivu, while the cinematography is handled by Nirav Shah.