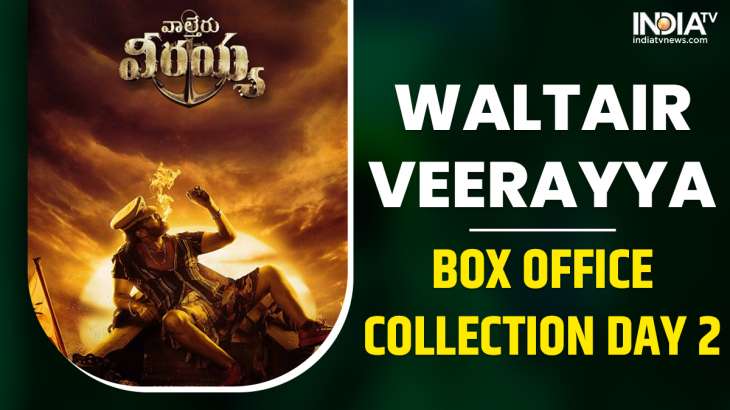 Waltair Veerayya Box Office Collection Day 2: Chiranjeevi and Ravi Teja’s on-screen pairing has pulled the audience to the theaters. The film had a bombastic opening and it continues to soar even higher on the second day. In just two days, the film’s collections have gone over Rs 50 Cr. The star powers of the southern superstars and the festive occasion of Sankranti and Pongal have definitely contributed to making Waltair Veerayya a blockbuster.

As per trade reports, Chiranjeevi and Ravi Teja’s film earned Rs 33 crore on Day 1. Its phenomenal run continued on day 2 as well as the movie raked in close to Rs 20 crore. This takes the film’s total collection to cross Rs 50 cr mark in just two days. The final figures are yet to be released by the makers.

‘Waltair Veerayya’, stars superstars Chiranjeevi and Ravi Teja with Shruti Haasan and Catherine Tresa as the leading ladies. The action-drama is written and directed by Bobby Kolli. Produced by Naveen Yerneni, Y Ravi Shankar and co-produced by G K Mohan, under the banner, Mythri Movie Makers, the film opens on January 13. The Telugu original and the dubbed Hindi version will be arriving on the same day, with the same title. While the story and dialogue were written by Bobby himself, Kona Venkat and K Chakravarthy Reddy penned the screenplay. The writing department also includes Hari Mohana Krishna and Vineeth Potluri.

The trailer of ‘Waltair Veerayya ‘ shows Chiranjeevi as a local don whose authority is threatened when the city commissioner ACP Vikram Sagar (played by Ravi Teja) comes into town. Chiranjeevi is at his usual best in action as well as in hilarious scenes. He brings that special charm to the character and narrative with his mass aura. Ravi Teja is equally good as the cop and the face-off between the two is the major asset.