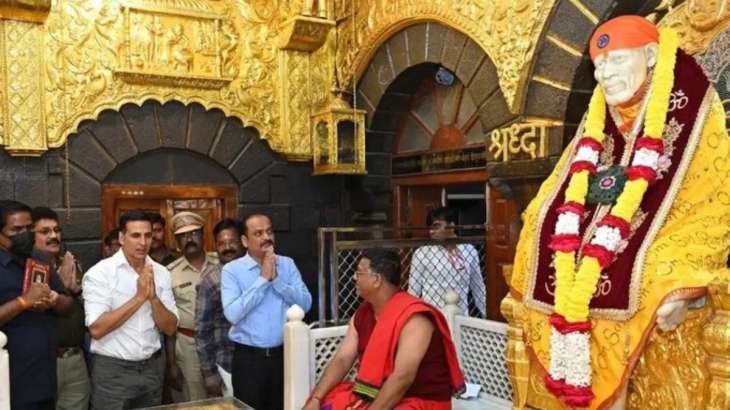 Akshay Kumar visited the Sai baba temple in Shirdi on Wednesday. A huge crowd of fans gathered outside the temple premises to catch a glimpse of their favourite Bollywood star as he sought the blessings of the almighty. The Shirdi village is one of the most important pilgrim sites around the world dedicated to the worship of Sai Baba. After launching the trailer of his upcoming film Selfiee in Mumbai recently, Akshay embarked on this spiritual trip and prayed to the lord.

Akshay Kumar was accompanied by heavy security as he visited the temple premises in Shirdi. A representative from the temple administration showed him around the place. The Bollywood star also greeted his fans who had gathered to catch his glimpse. He prayed inside the temple and was gifted a small idol of Sai Baba as a token for his visit to the holy shrine. The images and videos from the time have been going viral on social media.

When a fan fell down while trying to greet Akshay, the actor helped him back to his feet.

Earlier this week, Akshay Kumar launched the trailer of his upcoming film Selfiee in Mumbai. It is the remake of the Malayalam comedy drama Driving Licence, which was released in 2019. In Selfiee, Akshay plays the role of a Bollywood star and Emraan Hashmi portrays a motor inspector who is a huge fan of Akshay’s character. However, things take a turn when the two characters go against one another. The movie’s trailer has raised the curiosity of the fans. Selfiee also stars Diana Penty and Nushrratt Bharuccha and will release in cinema halls on February 24.