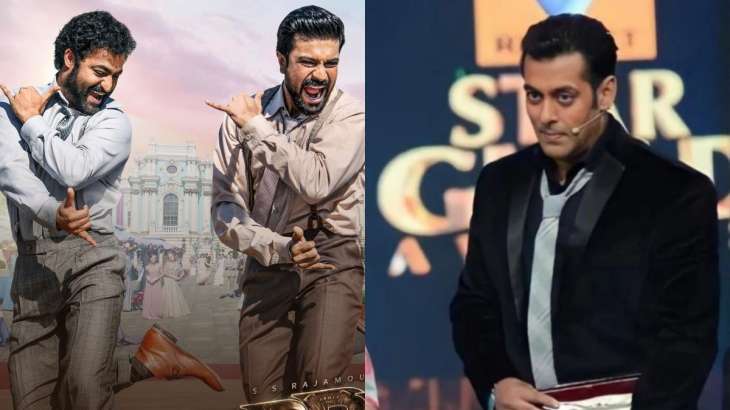 Naatu Naatu had become a trending hit already but it’s Golden Globes 2023 win has elevated its status even more. While the world soaks in the Naatu Naatu fever, a throwback video of Bollywood star Salman Khan dancing to the song with RRR team Ram Charan, Jr NTR, Alia Bhatt and SS Rajamouli has been going viral on social media. Team RRR promoted the movie on a pan-India scale and even arrived on Bigg Boss 15 where they joined the show host Salman Khan on stage and danced together.

Not just the Naatu Naatu song but the hook step has also been loved by the fans. In the trending reels and videos on social media, fans could be seen doing their own versions of Naatu Naatu and Salman Khan was not too far behind when team RRR joined him on the Bigg Boss stage. He matched steps and the high octane energy of Jr NTR and Ram Charan as they grooved to Naatu Naatu together. Later, Alia Bhatt and director SS Rajamouli also danced with Salman on the song.

On the movies front, Salman will be seen in Kisi Ka Bhai Kisi Ki Jaan. It will release on the occasion of Eid later this year.

Apart from this, he will play a cameo role in Shah Rukh Khan starter Pathaan, releasing on January 25. His highly-anticipated Tiger 3 opposite Katrina Kaif and Emraan Hashmi will release on Diwali 2023.