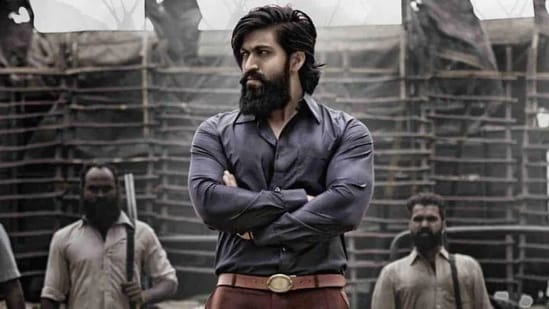 Before 2021, only one film had crossed the ₹100-crore barrier at the box office in the entire history of Kannada cinema. 2022 has seen five films do that, and most of them were not expected to earn even half of that. The list of top 10 highest grossing Indian films of the year includes two Kannada films, including the title at the very top. Quite simply, in terms of earning, content, and critical acclaim, no other Indian film industry has dominated the scene quite like Kannada cinema. Industry insiders and the men and women who made this change possible decode how the small industry scripted this incredible turnaround. Also read: Kantara becomes highest-rated Indian film on IMDb, Dhanush calls it a must-watch

How KGF Chapter 2 and Kantara ruled the box office

RRR may have grabbed headlines and Golden Globe nominations but in the box office race, even its gargantuan numbers were left behind by KGF: Chapter 2. In fact, the Hindi-dubbed version of KGF 2 made more money than any Hindi film in India ever. KGF 2’s Hindi version’s lifetime earnings of ₹435 crore dwarf the impressive collections of Dangal ( ₹387 crore), Sanju ( ₹342 crore), and Tiger Zinda Hai ( ₹339 crore). The year’s highest-grossing Hindi film Brahmastra lags way behind with ₹257 crore in India. No Kannada film has ever been the highest-grossing Indian film in a year. Till this year, no Kannada film had ever been in the top 10. This is a coup of the highest order.

But KGF wasn’t alone. Yash’s Rocky bhai, at least, had the advantage of being a sequel. The first KGF had been commercially successful itself, grossing ₹250 crore worldwide in 2018. That anticipation and pedigree helped it. Kantara had none of that though. The Rishab Shetty film was not a masala entertainer either. A rooted story set in coastal Karnataka, it had none of the ingredients to be a pan-India hit. Yet, it defied all logic to earn over ₹400 crore, beating several big films along the way. The Hindi version alone grossed over ₹100 crore.

Kannada industry is still connected to its roots: Rishab Shetty

Kantara’s lead actor and director Rishab Shetty owes this success to the industry’s ability to not be influenced by others. He says, “We are connected to our roots back home and believe in our stories. That is all that we are doing. We are not getting influenced by outside but just trying to bring out our stories. There is no formula. People will get misled that we can increase the budget and release pan-India so that it will be a hit. That’s not necessarily true. Everything that is happening is because of the audience. People are overcoming the language barriers to watch these rooted films.”

Content is being pushed by brave new generation: Prakash Raj

The language barrier has certainly gone down. The success of 777 Charlie, Vikrant Rona, and James outside Karnataka is further proof of this. All these films worked because of different reasons and their genres and tones were dramatically different. No other industry was able to give such diverse successes this year. The content itself was praised, regardless of the commercial aspect of it. Actor Prakash Raj, who started his journey with Kannada cinema, attributes this to the ‘new generation’ of Kannada storytellers, who have ‘changed the game’.

“The Rishab Shettys and Rakshit Shettys happened. Art is always pushed by someone. If you look at the Mangalore belt, their language and region was used for comedy in Kannada cinema. Now youngsters come from there and get a foothold in the industry. Kannada will emerge because of this new generation and the people have found a taste for it. And now to match to it, people who have been in the industry have to either unlearn and adapt, or fade away,” says the veteran actor.

Filmmakers can tell their stories on a large canvas: Sapthami Gowda

The two highest-grossing and most-talked-about Kannada films of the year–KGF 2 and Kantara–were both produced by the same production house. In just a year, Hombale Films has established itself as a leading name in film production across the country. Its slate of upcoming films includes a pan-India monster starring Prabhas, a Malayalam actioner featuring Prithviraj Sukumaran, and a couple of Kannada originals. Clearly, they are diversifying. Many in the industry say that production houses like Hombale also deserve some credit for the performance of Kannada cinema this year.

Sapthami Gowda, who starred in Kantara, says, “I think we should be thankful to production houses like Hombale Films. They have created a platform, encouraging the writers and directors from every region to bring out stories from their towns and villages and tell them to the world. There are a lot of untold stories that I would have listened to from my grandparents. But I can tell that story to the world now on a large canvas.”

2023 will bring fresh challenges for the Kannada film industry. Many will try to ape the trend and create copycats in hope of replicating Kantara and KGF’s successes. Most will fail. But a few, who understand that content is king, will succeed. The coming year, Kannada cinema could take a leading role again, or take a step back and retreat to the shadows again, where it had been for decades. But one thing is certain. In 2022, the industry, led by a few brave creators, showed that disrupting Indian cinema’s status quo is very much possible.