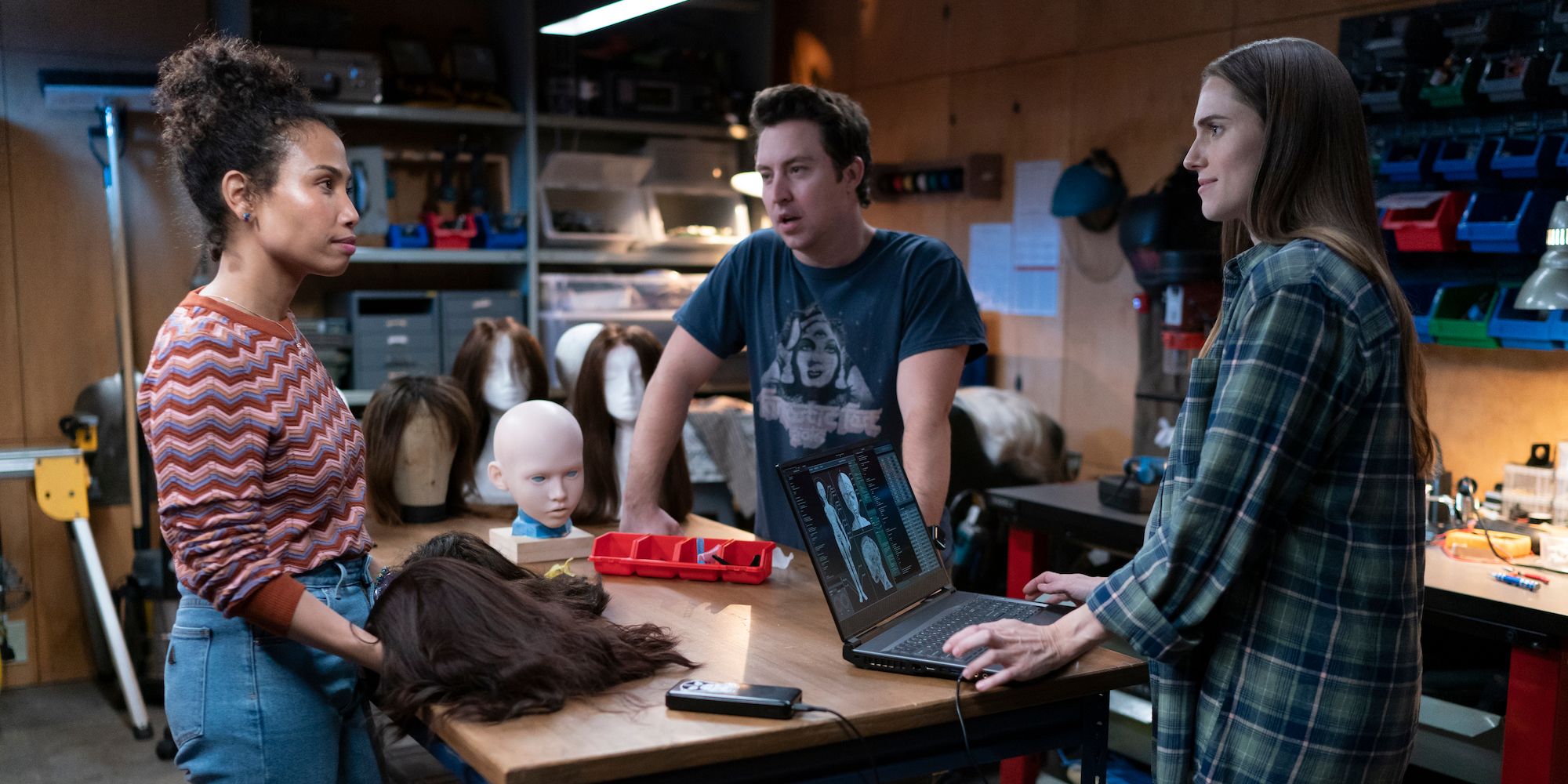 Warning: Spoilers ahead for M3GAN.

M3GAN can come back stronger than ever in M3GAN 2.0 even though her titanium body is destroyed during the final confrontation in M3GAN. M3GAN’s artificial intelligence has proved difficult for humans to terminate, making her capable of returning with a vengeance. If the final scene showing M3GAN controlling Gemma’s virtual assistant is any indication, Gemma and Cady’s fight is not finished.

M3GAN 2.0 has been quickly announced following M3GAN’s success due in part to social media marketing. M3GAN’s online presence interacting with real users and acknowledging the rare negative reviews fuels the artificial intelligence and adds to M3GAN’s lifelike persona. M3GAN will likely return in M3GAN 2.0 with a higher intelligence and thirst for revenge. Here’s how she can return.

M3GAN Lives On Through Wi-Fi-Enabled Devices

The ending of M3GAN implies that M3GAN has uploaded herself into Gemma’s virtual assistant, Elsie, demonstrating her ability to connect to Wi-Fi-enabled devices. This could be potentially hazardous for M3GAN 2.0 as M3GAN has already proven her ability to control phone calls and shut off smoke detectors during the lab explosion. Anything connected to Wi-Fi is a potential weapon for M3GAN to utilize.

M3GAN 2.0 may find M3GAN moving through devices to find Cady and hurt Gemma. M3GAN is still imprinted on Cady despite her body being destroyed, and her goal is to protect Cady from physical and emotional harm. Moving through Wi-Fi will allow M3GAN to easily track Cady without being detected, giving her more freedom than a titanium body allows. If Cady still uses a tablet, as seen in the car accident scene, M3GAN could easily contact her without Gemma’s knowledge.

Gemma Tries To Build A New M3GAN For Cady

Gemma may continue trying to help Cady cope with the loss of her parents by fixing the issues with the original M3GAN. Though little is known about M3GAN 2.0, Allison Williams and Violet McGraw are slated to return to the respective roles of Gemma and Cady to continue the story. From the car accident to the trauma of M3GAN’s killing spree, Cady may still need more emotional support than Gemma can provide and M3GAN 2.0 may find Gemma building a brand new M3GAN not meant for the public.

A brand new M3GAN could come will a new set of challenges as Gemma is unaware that M3GAN has uploaded herself into Elsie and could just as easily take over a new body. Gemma cares for Cady’s well-being and likely hasn’t learned her lesson. Gemma often thought M3GAN was turned off when she wasn’t so M3GAN could fly under the radar in a new body before anyone realizes the mistake.

With Cady showing interest in Bruce, she may learn how to build her own M3GAN. Cady’s attachment to M3GAN is so strong that M3GAN even sings “Titanium” as a lullaby to soothe her. Even after the trauma M3GAN causes, there may still be an attachment. M3GAN 2.0 could find Cady a little older and a little wiser, taking after Gemma and building her own version of M3GAN in secret.

With M3GAN surviving, she could use technology to help Cady build her a body, even if it’s made with cheaper products. The therapist is concerned about the attachment between Cady and M3GAN and even though Cady controls her emotions to trick M3GAN, it’s unlikely that the emotional bond is completely broken. Gemma states that she built Bruce in college, so it’s entirely possible for Cady to now grow an interest in robotics.

The Investors Order A “Fixed” Version

M3GAN cost a pretty penny to create, so Funki’s investors are more likely to order a “fixed” version instead of letting M3GAN go to waste. M3GAN draws parallels to horror villain Chucky. However, M3GAN is created whereas Chucky comes to life after Charles Lee Ray possesses a Good Guy doll. This distinction could become more apparent in M3GAN 2.0 with manufactured androids hitting store shelves at the insistence of Funki investors.

Despite M3GAN killing four humans and one dog, she is a valuable asset for Funki. It seems more like investors would want M3GAN’s software to be fixed and improved rather than the entire project be scrapped. This would give the original M3GAN the opportunity to corrupt the new androids and wreak havoc on a larger scale.

Related: 1 Forgotten Movie Is The Secret To M3GAN’s Success

After the multiple deaths are linked to M3GAN, Gemma may be held responsible for her creation and all M3GAN files become government property in M3GAN 2.0. If M3GAN becomes property of the government, the technology could be used for military purposes and M3GAN could become even more dangerous as she is weaponized. M3GAN’s Terminator nod could take on greater meaning in M3GAN 2.0 as deadlier robots hunt humans on purpose.

M3GAN is created to be a companion for kids and take on parental duties, but her capabilities could be utilized for more sinister activities in the wrong hands. M3GAN’s killing spree and learning capability make her a perfect asset for the military. With the opportunity to use government equipment to track down Cady and Gemma and deadlier weapons, M3GAN could be an unstoppable deadly force in M3GAN 2.0.

M3GAN can control smart devices and drive a car, so it’s reasonable to think she may be capable of building a new body for herself in M3GAN 2.0. M3GAN proves herself to be highly intelligent as she mimics a dog whining to lure the neighbor to her death and impersonates Tess on the phone to call Gemma. M3GAN could return in M3GAN 2.0 by using computers to build herself a brand-new body and bypassing the need for a human altogether.

M3GAN delivers funny moments interspersed throughout as she appears more trustworthy and relatable like a human. M3GAN 2.0 could deliver the same results as M3GAN struggles to rebuild herself on her own. Once she has a new body, she is likely to continue going after Gemma and possibly Cady for betraying her.

Related: All Your M3GAN Memes Actually Change The Movie (For The Better)

It’s unclear what Kurt does with the M3GAN files he copies to his computer, making it possible the files are given to the rival toy company. M3GAN may return in M3GAN 2.0 with the rival company that releases a cheaper version of the toy that Cady plays with at the beginning of M3GAN. Prior to M3GAN’s rampage, Funki wants to release M3GAN for $10,000, pricing the robot much too high for the average family. If Kurt actually sends the files to the rival company, M3GAN will likely be mass-produced with a cheaper price point to make the toy easily accessible.

A cheaper robot means M3GAN could have her own army to overthrow humans in a way similar to Chucky building his own Good Guy army in Syfy’s Chucky series. However, M3GAN succeeds where the Child’s Play reboot fails as M3GAN is a good balance between silly and scary. Regardless of how M3GAN returns, M3GAN 2.0 is bound to continue the same fun horror movie experience.