Ant-Man And The Wasp Quantumania Image Shows Heroes In Hiding 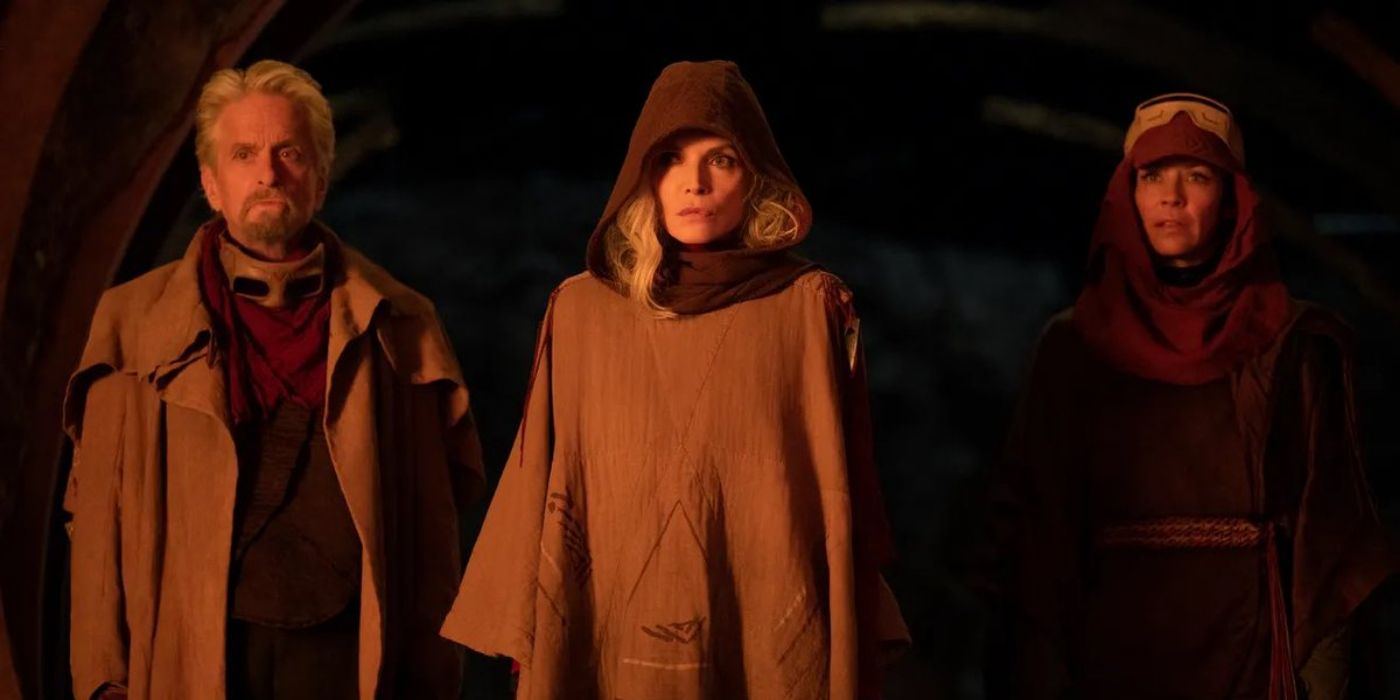 A new Ant-Man And The Wasp Quantumania image shows what it looks like when Marvel heroes have to hide in the wastes of the Quantum Realm.

A new promotional still from Ant-Man and the Wasp: Quantumania shows exactly what it looks like when heroes are trapped in the Quantum Realm. Coming in the wake of Avengers: Endgame, the Ant-Man team is considerably more famous now that Scott Lang (Paul Rudd) was involved in the final fight against Thanos. Yet, after Scott, Cassie Lang (Kathryn Newton), Hope van Dyne (Evangeline Lilly), Janet van Dyne (Michelle Pfeiffer), and Hank Pym (Michael Douglas) are trapped in the Quantum Realm during an experiment, they need to fight for their lives just to get home.

Without the benefit of the technology of the larger world, the Ant-Man and the Wasp: Quantumania heroes are essentially scrambling through the wastes to stay alive and bide their time. A new Marvel Cinematic Universe promotional image from USA Today reveals that they have to gather clothing to hide their faces and blend into the Quantum Realm. While the image only shows Hank, Janet, and Hope, a previous Ant-Man and the Wasp: Quantumania image shows that Scott and Cassie are just as disheveled, but Scott has held onto his suit. Check out the newly released image below:

Everything We Know About Ant-Man And The Wasp Quantumania

Ant-Man and the Wasp: Quantumania will be a desperate fight for survival for the Ant-Man team, especially once they discover the exceptionally dangerous Kang the Conqueror (Jonathan Majors) hiding among the wastes. With Ant-Man and his friends dragged directly into the ongoing multiverse crisis, they will need to decide if they should make a deal with Kang to escape the Quantum Realm, or if they can find another way out that won’t compromise their world. As Ant-Man and the Wasp can’t beat Kang since he has an army of his own, they’re going to need to rely on more than just brute strength to stop the villain — if they try at all.

The entirety of Ant-Man and the Wasp: Quantumania won’t be solely related to the ongoing multiversal crisis. There will also be emotional relationships to be explored. With Cassie now practically an adult after Scott missed years of her life, the two are going to need to have frank discussions about their relationship. Cassie is going to be thrown directly into a life-or-death situation, so she will also need to prove to herself and Scott that she’s capable of lasting in a fight. Another team member will also have an interesting story, as Janet has a complex relationship with Kang that Pfeiffer promises to explore.

How Will The Ant-Man Team Escape The Quantum Realm?

Considering that Janet spent decades trapped in the Quantum Realm, it won’t be easy for the team to escape. With few resources and no opportunity to prepare themselves for the surprising journey, they might have to rely on Kang the Conqueror’s support if they ever hope to return to Earth-616. Since Kang knew Janet before Loki destroyed the Sacred Timeline, he will have good reason to help them if Janet remained on good terms with the powerful warlord. If fan theories are correct about how Scott escaped the Quantum Realm in Ant-Man and the Wasp: Quantumania, Scott may have already met Kang, which could mean that there is a path forward. However, the way the team tries to escape the quantum realm will be consequential in setting Kang Dynasty and Secret Wars.