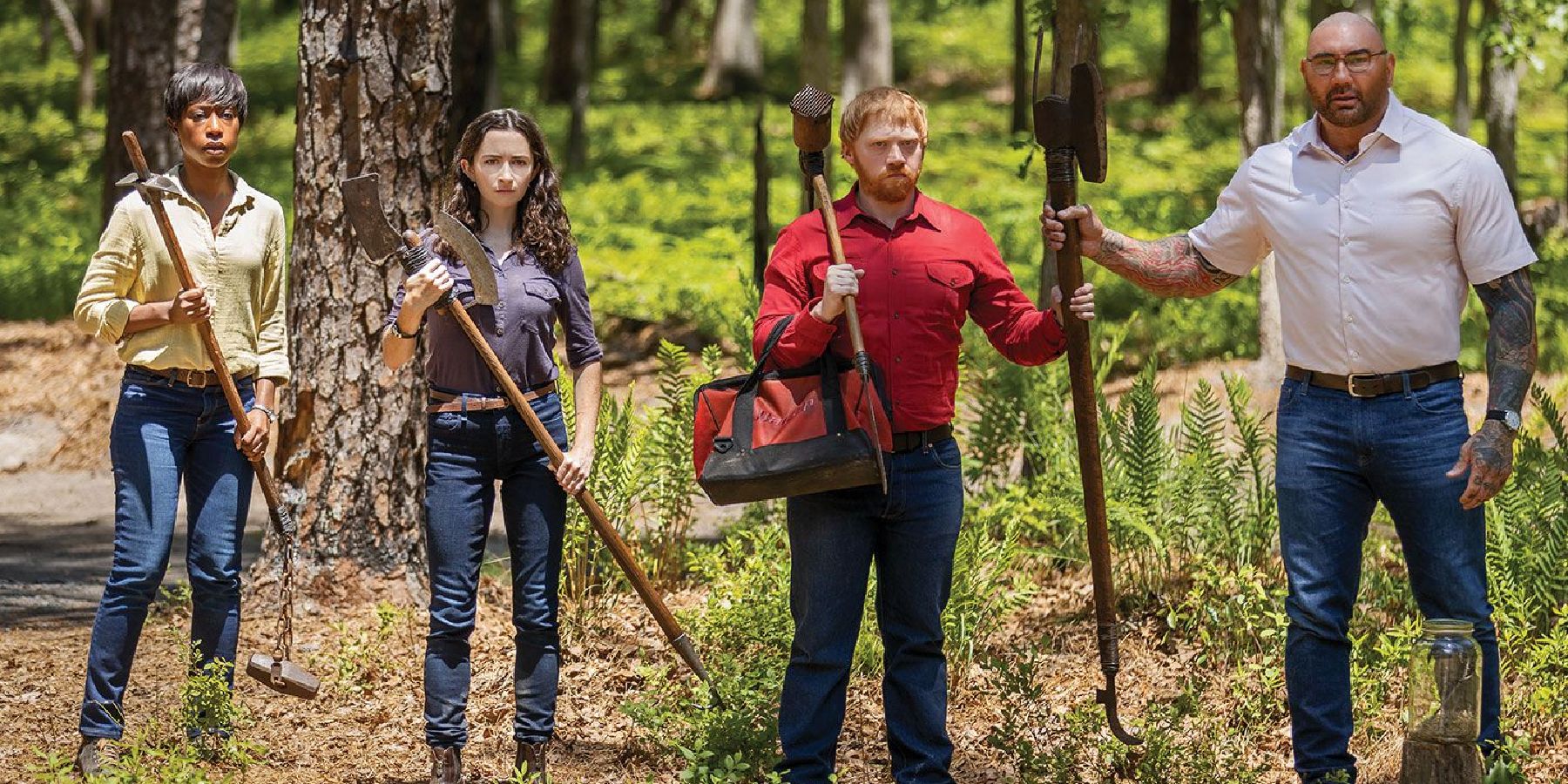 Guardians of the Galaxy star, Dave Bautista, prepares to attack in a new image of director M. Night Shyamalan’s upcoming thriller, Knock at the Cabin.

Knock at the Cabin star, Dave Bautista, is ready to attack in a new image from writer-director M. Nigh Shymalan’s latest thriller. The director made a name for himself in the psychological thriller genre with 1999’s The Sixth Sense. His success continued with the likes of Unbreakable and Signs. Shyamalan has had a renaissance in recent years with the found footage horror The Visit, the surprise Unbreakable sequel Split, and Old. His next unnerving film, Knock at the Cabin, will land in theaters next month.

Total Film (via GamesRadar) recently shared a new image from Knock at the Cabin which features Bautista preparing to attack. The Guardians of the Galaxy actor stars as Leonard, the leader of the group of armed four strangers. He stands alongside Harry Potter‘s Rupert Grint as Redmond, Radium Girls‘ Abby Quinn as Sabrina, and Avenue 5′s Nikki Amuka-Bird as Adriane. Check out the new Knock at the Cabin image below:

Related: Knock At The Cabin Could Be Shyamalan’s Riskiest Film Yet

Everything We Know About Knock at the Cabin

Knock at the Cabin is based on Paul G. Tremblay 2018 award-winning novel The Cabin at the End of the World. The thrilling tale centers on Andrew (Jonathan Groff) and Eric (Ben Aldridge) who take their daughter Wen (Kristen Cui) on vacation to a remote cabin in the middle of the woods. There they are confronted by four strangers who take the family hostage, forcing them to make a dark terrible decision that may thwart the apocalypse and save the world. Shyamalan has since praised stars Bautista and Cui, claiming that the pair gave him flashbacks to working with Haley Joel Osment on The Sixth Sense.

Tremblay’s book was originally adapted by screenwriters Steve Desmond and Michael Sherman whose script was recognized on 2019’s The Black List, a collection of the best unproduced screenplays. When Shyamalan got his hands on the original Knock at the Cabin script, he thoroughly enjoyed the story and completely rewrote it, calling it the fastest work he has ever done in his long career. Tremblay and Shyamalan have both confirmed that the upcoming film will differ from the original book in various ways.

However, as with many of Shyamalan’s films, major plot details have been kept hidden from the public, with no information released regarding the nature of the film’s changes to Tremblay’s original story. Surprisingly, Knock at the Cabin has been given an R-rating for violence and language, a first for the director since his 2008 eco-thriller, The Happening. With Knock at the Cabin landing in theaters next month, audiences do not have to wait much longer to see what surprises Shyamalan has in store.