Michael Giacchino to Direct ‘Them!’ Remake 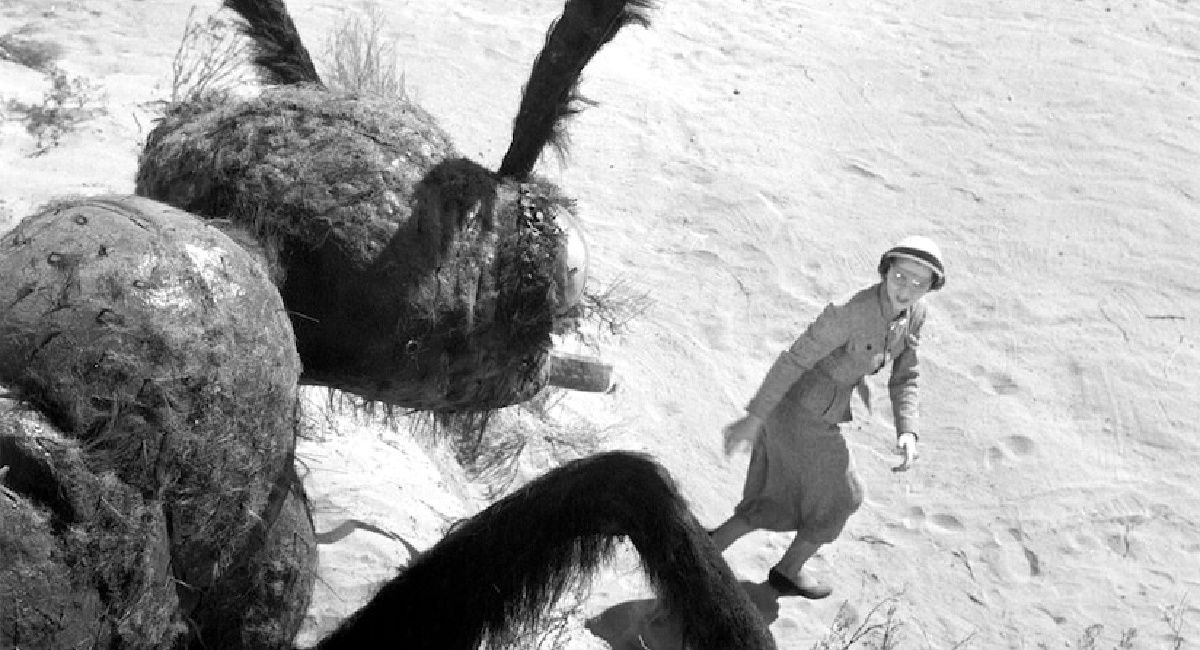 A scene from 1954’s ‘Them!’ Photo courtesy of Turner Classic Movies.

After putting his love of vintage monster movies to good use with the Marvel Studios/Disney+ special ‘Werewolf By Night,’ composer turned director Michael Giacchino is taking things to the next level by helming a remake of ‘Them!’ for Warner Bros.

The original ‘Them!’ – a 1954 thriller about nuclear irradiated ants directed by Gordon Douglas – is one of the first giant monster movies and a classic of post-war paranoia sci-fi. According to Deadline, Giacchino “is meeting with writers in hopes of getting the production up quite soon.”

“There’s always a movie in your mind that never leaves your head,” says Giacchino. “For me, that’s ‘Them!’ It wasn’t until much later in life until I learned what it was about — the nuclear age.”

Adds the director, “What I love about ‘Them!’ is exactly what it’s called: ‘Them!’ It’s about the other, the unknown which one refuses or can’t understand. The current version of ‘Them!’ is about immigration, and to tell a story about the subject through a lens of this insane science fiction monster movie.”

One of the most successful film composers working today, Giacchino has scored such box-office blockbusters as ‘The Incredibles,’ ‘Up,’ J.J. Abrams’ ‘Star Trek,’ Marvel’s ‘Doctor Strange’ and ‘Spider-Man: Homecoming’ (as well as its sequels ‘Far From Home’ and ‘No Way Home’), ‘Rogue One: A Star Wars Story,’ ‘Jurassic World,’ ‘Inside Out,’ ‘ Zootopia,’ ‘Coco,’ and ‘The Batman.’

Before helming ‘Werewolf by Night,’ he directed the short ‘Monster Challenge’ and an episode of Paramount+’s ‘Star Trek: Short Treks.’

Giacchino has provided the score for all of his directing projects, and will do so again for ‘Them!’

“The Giacchino brothers made movies as kids around their Edgewater Park Township, NJ home. Michael would direct, and Anthony would star along with their neighborhood friends. Michael Giacchino worked side jobs as a teenager to save up to buy film stock. He used an X-Acto knife to make scratches on the film strips in order to make laser and spark special effects. He graduated from the School of Visual Arts in NYC where he studied filmmaking and later held jobs at Universal marketing and Disney publicity.”

“Eventually he segued to composing for videogames, one highlight being the Playstation game of ‘Jurassic Park: The Lost World’ which Steven Spielberg personally hired him on. It was through videogames that J.J. Abrams came to know Giacchino and hired him to compose for his TV series ‘Alias’ and ‘Lost’ as well as big pics ‘Star Trek,’ ‘Star Trek Into Darkness,’ and ‘Mission: Impossible III.’ His next score will be for Taikia Waititi’s sports comedy-drama ‘Next Goal Wins,’ due out later this year.”

Warner Bros Pictures President of Production and Development Jesse Ehrman – who’s overseeing ‘Them!’ on studio’s Burbank, CA lot – remarks, “Michael Giacchino is a unique talent. We’re excited to be working with him and have him at the studio.”

A scene from 1954’s ‘Them!’ Photo courtesy of Turner Classic Movies.