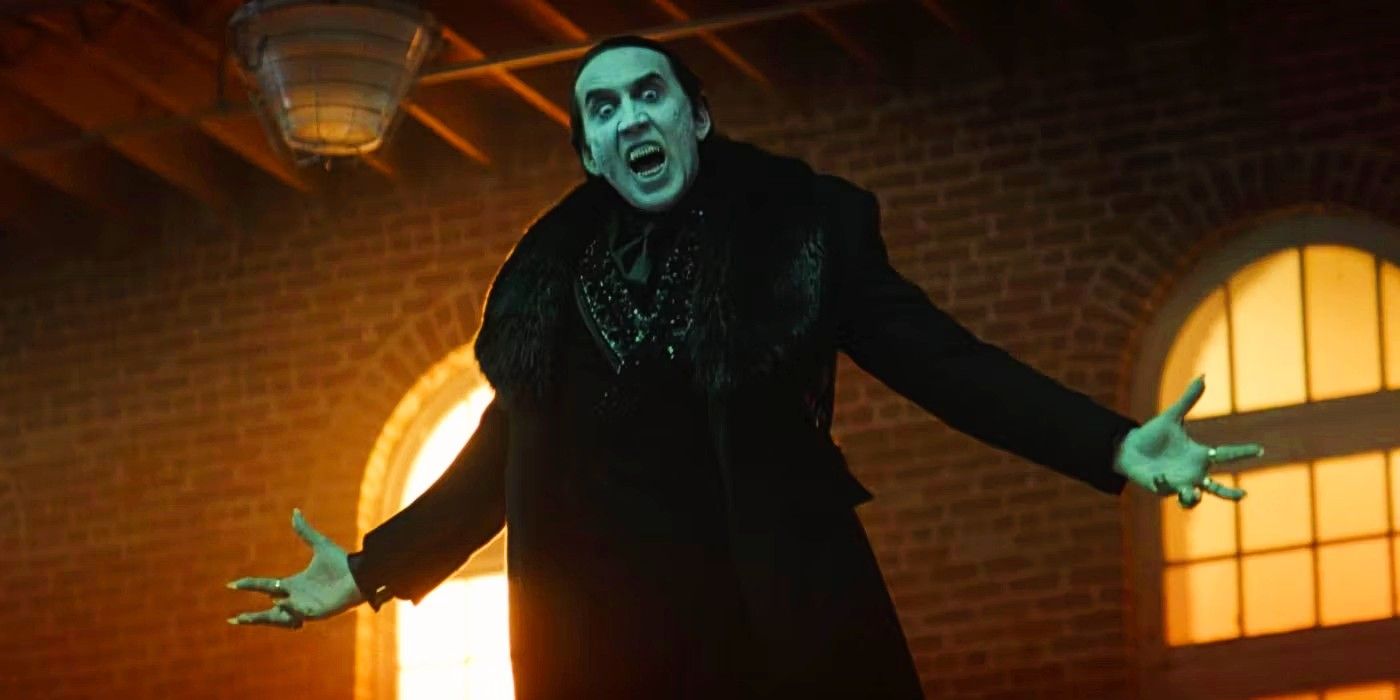 Nicolas Cage’s commitment to his Dracula performance during the making of the Renfield movie made his co-star Brandon Scott Jones emotional.

Nicolas Cage’s Dracula performance in Renfield made his co-star Brandon Scott Jones very emotional. As the title indicates, the upcoming horror comedy film will primarily focus on Count Dracula’s famous henchman R.M. Renfield who, as portrayed by Nicholas Hoult in the film set in modern-day New Orleans, falls in love with a feisty traffic cop played by Awkwafina and decides to leave his line of work. However, much of the focus has instead been on Nicolas Cage and his highly-anticipated take on the famous vampire.

This week saw the first Renfield trailer revealing Nicolas Cage’s Dracula, and now, one of his co-stars in the film is opening up about his performance. During a recent interview with Collider, Brandon Scott Jones discussed what it was like working with Cage on the set of Renfield. Jones, who can be seen in the trailer as the support group leader, admitted that he got emotional watching Cage’s commitment to his work and his utter excitement about playing Dracula. Read what Jones said below:

One of the biggest takeaways I had when I came home from shooting that movie was, Nicolas Cage has been in 14,000 movies. He’s been acting forever. He’s one of the best. He’s so, so good. And there’s this maybe cynical side of yourself that you don’t even know exists — and when I say yourself, I’m kind of talking about myself — where you kind of assume that maybe they’re just sort of going on autopilot or whatever. And I watched this man come in to work, sit in the make-up trailer, get all made up as Dracula, and then show up on set and was so excited, and so — oh my god, I almost got a little emotional because it was really moving to see someone love the craft so much. And he had these really funny moments where I remember him being like, ‘Wait, wait, I just want to try something really quick,’ and then he would just make a facial expression into the camera just so they could have it.

What To Expect From Nicolas Cage’s Dracula Performance

The Renfield star’s comments are just the latest hyping up Cage’s performance as Dracula, which has been highly-anticipated ever since the casting was first announced well over a year ago. In interviews, Cage has revealed some of his many inspirations for his Dracula performance, which run the gamut from more obvious sources like Christopher Lee’s Dracula to some more outlandish sources such as David Bowie. Cage’s collaborators on Renfield have also said he drew heavily from Anne Bancroft, who famously played Mrs. Robinson in the 1967 film, The Graduate.

The recent Renfield trailer revealed the first look at Cage’s Dracula, although he only appears sparingly. Instead, the trailer mostly focuses on a single scene with Nicholas Hoult’s Renfield attending a therapy group looking for some support in escaping a toxic relationship with his boss. Jones’ character, who is named Mark, is featured prominently in this scene and just as he lends Renfield some helpful advice, Cage’s Dracula dramatically enters the scene and begins wreaking havoc on the support group.

Cage’s Dracula performance is clearly meant to be tongue in cheek, which befits the film that has been described by director Chris McKay as a comedic approach to Bram Stoker’s 1987 novel à la What We Do in the Shadows. The interesting takeaway from Jones’ comments is that no matter how campy the role may be, Cage still approaches the performance with the same level of commitment he would a more serious dramatic role, one recent example being Pig, which many believe he was snubbed an Oscar nomination. The wait for Cage’s Dracula performance won’t be too long, as Renfield releases in theaters on April 14.

More: Why Nic Cage’s Dracula Is Hardly In The Renfield TrailerSource: Collider