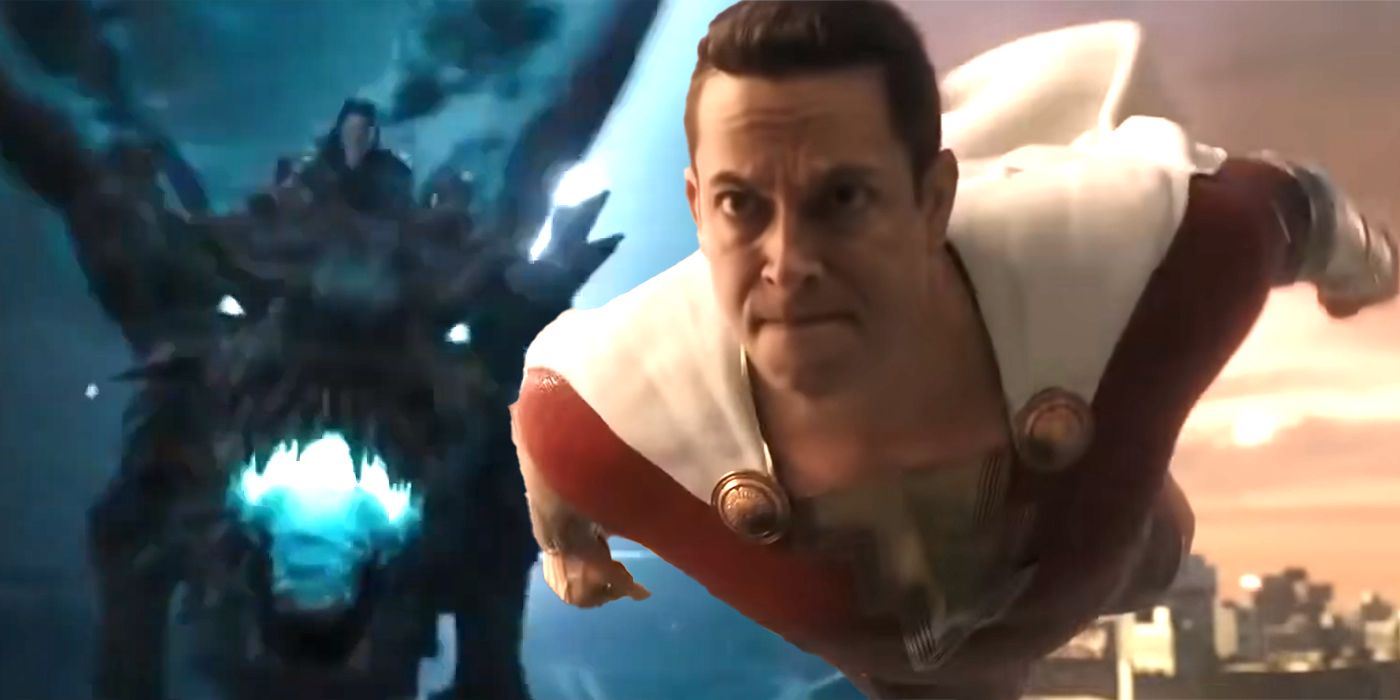 A new Shazam 2 TV Spot features new footage from the DCU sequel, including an epic dragon fight and the perfect Game of Thrones joke.

After already poking fun at Universal’s Fast & Furious franchise, a new Shazam! Fury of the Gods TV spot reveals an epic dragon fight in the DC Universe sequel and the perfect Game of Thrones joke. Zachary Levi is returning to lead the cast for the upcoming film after making his DCU debut in 2019’s Shazam!, not only reuniting with much of the first film’s cast as well as former horror director David F. Sandberg and screenwriter Henry Gayden. Following multiple delays due to the ongoing COVID-19 pandemic, production on Shazam! Fury of the Gods kicked off in 2021 and anticipation continues to grow leading up to its arrival.

With just two months remaining until the film’s release, a new Shazam! Fury of the Gods TV spot (via Comic Trailers & Clips) has arrived and can be seen below:

The new footage for the upcoming DCU sequel features more looks at the Daughters of Atlas, including Rachel Zegler’s Anthea working with Helen Mirren’s Hespera and Lucy Liu’s Kalypso. The Shazam! Fury of the Gods TV spot also reveals the epic dragon fights to come from the film and the titular hero’s perfect Game of Thrones joke for the situation.

Related: What Will Be The Final Movie Of The Old DCU?

What We Know About Shazam 2 & His DCU Future

Shazam! Fury of the Gods will pick up a few years after its predecessor as Asher Angel’s Billy Batson and his foster family as their lives of being superheroes pits them against the Daughters of Atlas, who are seeking to acquire a weapon that could destroy the world. Levi and Angel are returning to lead the cast alongside fellow DCU vets Jack Dylan Grazer, Adam Brody, Ross Butler, Ian Chen, Faithe Herman, Meagan Good, Djimon Hounsou, Grace Fulton, Jovan Armand, D.J. Cotrona, Marta Milans, Cooper Andrews and Rizwan Manji. Shazam! Fury of the Gods will also see the franchise debuts of Zegler, Liu and Mirren as the Daughters of Atlas, with the former teased as a potential love interest for Grazer’s Freddy Freeman.

Unlike its predecessor, Shazam! Fury of the Gods comes as the DCU finds itself in the middle of a major upheaval, with The Suicide Squad‘s James Gunn and producer Peter Safran now set as DC Studios and scrapping Henry Cavill’s Superman return plans, Patty Jenkins’ Wonder Woman 3 and Dwayne Johnson’s Black Adam future. Levi has remained confident in his DCU future as Shazam, stating that while both Gunn and Safran could ultimately decide to go a different route in their 10-year plan, he believes he’s in a “pretty good position.” Given early plans for the franchise formerly known as the DC Extended Universe was leading up to a showdown between Shazam and Black Adam, Johnson’s exit has closed the door on that path.

While the two Shazam-based characters may no longer come to blows in the future, the first Shazam! movie did tease a conflict between him and Mister Mind, the talking alien caterpillar voiced by Sandberg in the post-credits posing an alliance with Mark Strong’s Dr. Sivana. Sandberg confirmed that Shazam! Fury of the Gods will not include Mister Mind due to concerns of overstuffing the plot, and with he and Sivana going on to be part of the Monster Society of Evil in the comics, it would be interesting to see the two characters come back for a potential third movie. Given Gunn’s proclivity for adapting less popular characters, it seems likely Shazam could have a bright future in the DCU after his return to the screen on March 17.

Next: Shazam 2 Could Be The Key To Saving The DCEU”s Justice LeagueSource: Comic Trailers & Clips