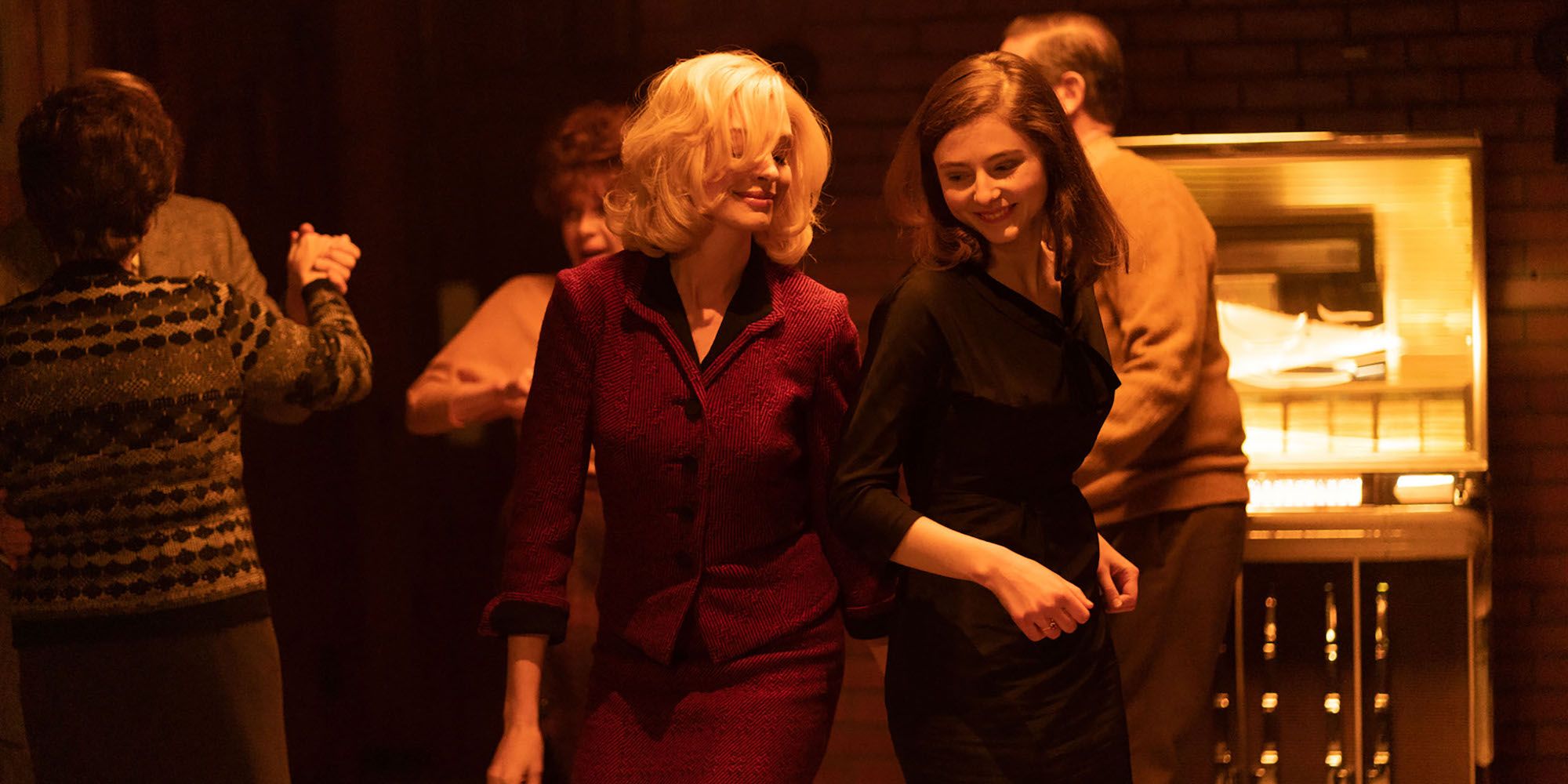 Directed by William Oldroyd from a screenplay by Luke Goebel, the less one knows about Eileen going into the movie, the better. It’s the kind of film that will shock and unnerve, but also potentially disappoint. Based on the novel by Ottessa Moshfegh, Eileen boasts magnetic performances from Thomasin McKenzie and Anne Hathaway. But for all its intrigue and setup, the film’s final act isn’t fully earned, taking a turn that is more for shock value than it is for story.

Set in 1960s Boston, the story follows Eileen (McKenzie), an employee at a prison facility and the daughter of a former police chief (Shea Whigham). Eileen’s been working at the prison for four years and takes care of her father, who is always drunk. Her life seems to be going nowhere, but then she meets Rebecca (Hathaway), the prison’s new psychiatrist, who is captivating and quickly attracts Eileen’s attention. The two become friends and something more, but it isn’t long before their relationship takes a turn.

Eileen’s actions at the end of the film make sense for her character’s trajectory. She is a painfully lonely person and has long felt the effects of her father’s verbal abuse and alcoholism. However, it’s Rebecca’s actions that come as more of a shock, altering the film’s course entirely, forcing it along a path the story could have arrived at differently. Eileen’s final act is unexpected. Perhaps it’s meant to surprise and elicit gasps from the audience, but it’s disingenuous to what came before.

Rebecca and Eileen are both interesting characters, but Rebecca is particularly underwritten, and the pair’s relationship even more so. There needed to be more interactions between them before the film’s big twist, but Oldroyd holds back on offering more. Even the queer romance is undercooked, and often feels restrained. The first half of Eileen is intentional, slowly but surely setting up the characters and the world in which they live.

Eileen’s life is the same as it’s always been for four years, and it’s easy to see she’s bored and miserable in her life, passive, an observer who doesn’t seem interested in taking action and often feeling like she can’t. Rebecca is the catalyst for the changes Eileen begins to make. Finally, someone is truly seeing her for who she is and can be. For the first time in a long time, Eileen feels alive and in control of where she might go. But the final act doesn’t work as well as it should despite Eileen’s growth. It diminishes much of the groundwork Oldroyd spent so much time fleshing out in the first half. The twist takes a quick shortcut to get to the story’s conclusion, while leaving the state of things open-ended and ominous. The lack of resolution is perfectly fine, though it would have worked better had the twist been earned.

And yet, there is something intoxicating and alluring about Eileen. Regardless of how the story ends and in which direction it goes, one cannot stop watching the film. It’s intriguing and mysterious. Eileen’s watchability is due in large part to Thomasin McKenzie and Anne Hathaway’s performances. McKenzie is timid as Eileen, imbuing her character with a sense of detachment to everything around her. Her eyes, glazed and unfocused, change when she’s around Rebecca, and McKenzie conveys Eileen’s growth in her body language. Hathaway, on the other hand, is a scene-stealer. Her Rebecca is oozing confidence and sex appeal; she’s elusive with just a hint of deception lurking beneath the surface, and Hathaway looks like she’s having a blast in this role.

As hypnotic as Eileen is, the film ultimately falls short. Its final moments suggest that it could have become a completely different film than what was initially presented. Had there been enough time to flesh out the story and build up the tension, the final Rebecca twist would have worked a lot better.

Eileen premiered at the 2023 Sundance Film Festival on January 21. The film is 97 minutes long and rated R for violent content, sexual content and language.