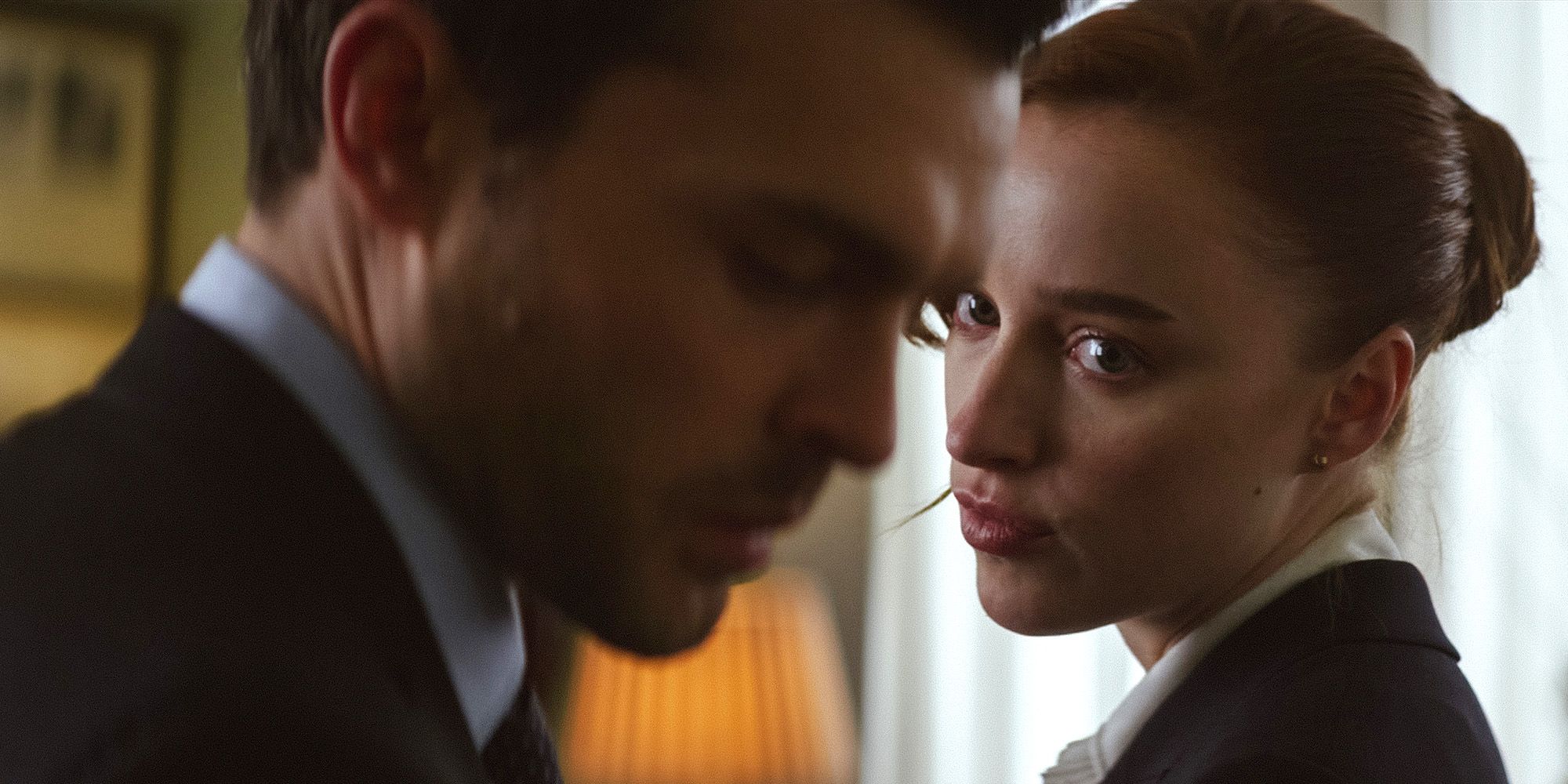 Fair Play is intoxicating and thrilling, unraveling slowly but surely until it reaches a sensational finale that is as crushing as it is powerful.

Social conditioning, gender roles, competition, and how they affect a romantic relationship are at the forefront of Fair Play, a film that will have viewers at the edge of their seats. Written and directed by Chloe Domont, Fair Play is intoxicating and thrilling, unraveling slowly but surely until it reaches a sensational finale that is as crushing as it is powerful.

Emily (Bridgerton’s Phoebe Dynevor) and Luke (Solo: A Star Wars Story’s Alden Ehrenreich) are a New York couple who are in love and ready to get married. They’re not ready to announce their engagement, though, because they’re both financial analysts at the same company and their relationship has yet to go public. When Emily is promoted, to a position Luke was convinced he was going to get, their relationship becomes strained. As the film goes on, the couple spirals and things get incredibly tense, as Luke begins to act on his gendered conditioning, which heavily impacts the closeness he and Emily share.

Related: To Live And Die And Live Review: Basir’s Feature Is Intoxicating [Sundance]

Though Fair Play seems rather straightforward, it leaves audiences guessing as to where it will go next. Domont’s writing is striking and cutthroat, getting to the heart of gender and power dynamics without spoon-feeding its message to viewers. The drama is incredibly fierce and builds the tension between its characters without ever getting ahead of itself. It takes its time, but the pacing is swift, and the editing is superb. Much of the intensity is thanks to the way the film is shot.

Cinematographer Menno Mans is often focused on Dynevor and Ehrenreich’s faces as they’re listening to others or peering intently at one another or around the office. This creates an electric energy that is practically hypnotizing and nail-biting, especially as the couple’s issues begin to increase over the course of the film and the emotional potency rises. Domont takes Fair Play to some pretty dark places, and it’s exciting and daunting to watch all at once. Never has the financial world been more riveting and the feelings throughout so visceral.

Where the film excels is in its exploration of social conditioning and gender dynamics. Luke seems like a progressive guy, and he tried really hard to be supportive, but there’s something within him that simply snaps, and the film showcases how easy it can be to slip back into assumed societal norms and gender roles. Had Luke been the one to get a promotion, Fair Play would have been a completely different film. The couple says and does some fairly awful things, but the heart of the story is primarily in Luke’s handling of the situation.

The film also explores how Emily, as a woman, navigates her new position and the power it brings, especially as she is surrounded by men in high positions. The film masterfully shows the domino effects of this promotion and all the layers that come to light within the couple’s relationship. What’s more, Domont trusts the audience to put the pieces together and leaves room for thoughtful analysis. This isn’t a film that is easy to forget and leaves quite an impression. It’s incredibly powerful and magnetic, leaning into the duress and emotional heaviness of its subject with aplomb.

Of course, Fair Play is elevated by powerhouse performances from Dynevor and Ehrenreich. They are exceptional, bringing so much nuance through their glances and body language. Sometimes they don’t have to say anything at al and the audience will understand exactly what is going on in their heads. Both actors convey the deep love and affection Emily and Luke have for each other privately, while switching up their demeanors at their jobs. There is much to dissect in their performances that it will require another watch. It’s exhilarating to watch them go toe-to-toe with one another, and Dynevor and Ehrenreich really bring everything they’ve got.

With such strong performances, tight writing and direction, Fair Play is a must-see. It’s unexpected, sneaking up on audiences slowly before they find they’re knee-deep into the story and ready for the wild, head-spinning ride. Domont’s feature is occasionally uncomfortable to watch because of how things unravel, but it’s unnerving and utterly heart-pounding in all the best ways. An exceptionally strong feature debut from Domont.

Fair Play premiered at the 2023 Sundance Film Festival on January 20. The film is 113 minutes long and not yet rated.