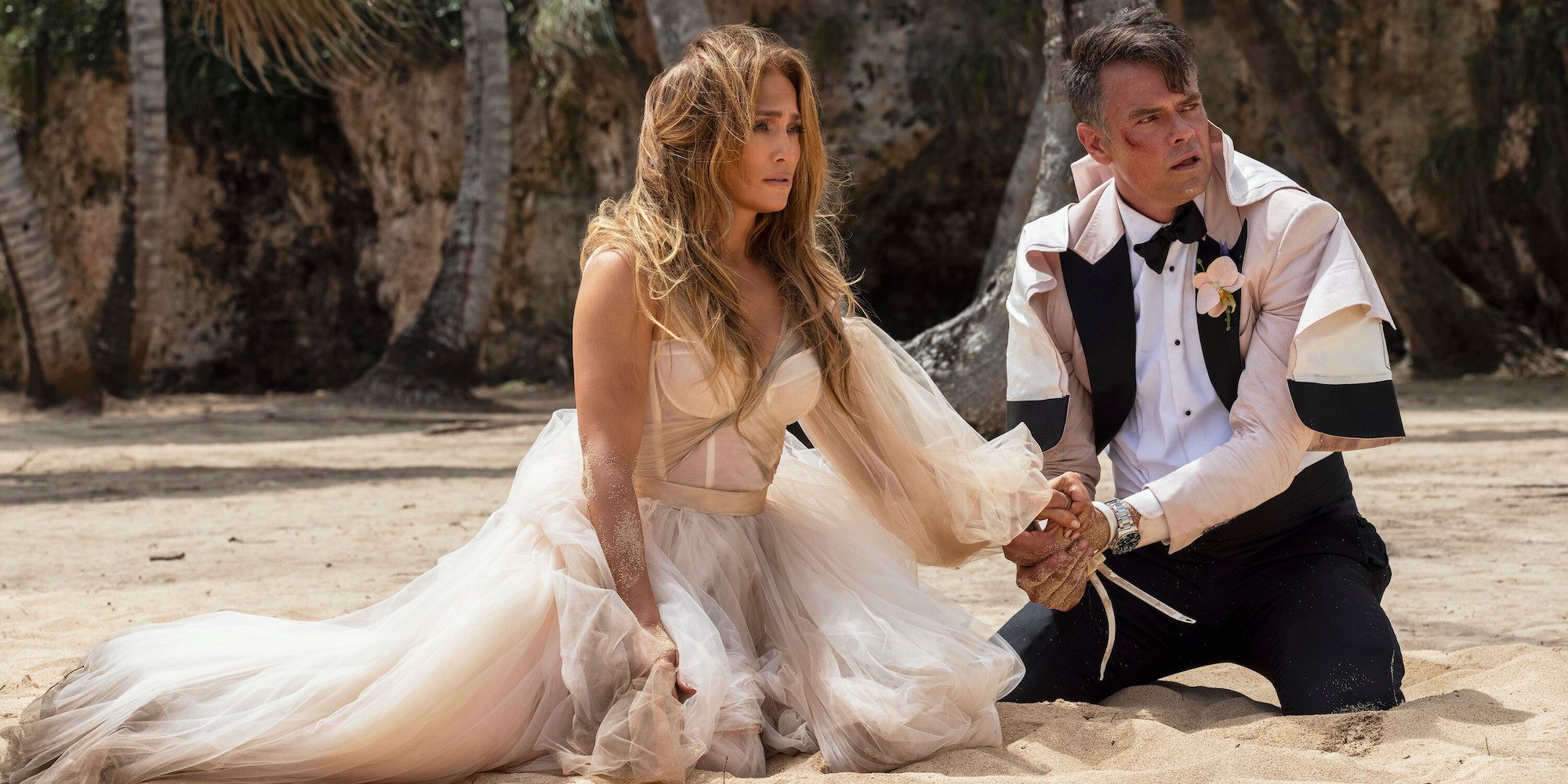 With a cast of iconic comedians, Shotgun Wedding seemed like a surefire hit, but it’s overwhelmingly bland despite its extra special ingredients.

Last year when Marry Me, the romantic comedy starring Jennifer Lopez and Owen Wilson was being released, many were touting it as a return to form by the pop singer-turned-actress, once a reigning queen of rom-coms. But the film was hardly worth the fanfare and landed with a whimper in theaters and on streaming. Sometime around the release of that movie, Shotgun Wedding was in the works and seemed to signal that after an unfortunate snub fest for her performance in Hustlers, Lopez was returning to a most beloved genre. Shotgun Wedding appeared to be the right call — it took some familiar notes from J.Lo rom-coms of the past and threw it into an action movie blender. With a cast of iconic comedians and a totally game Lenny Kravitz in the mix, Shotgun Wedding seemed like a surefire hit, but it’s overwhelmingly bland despite extra special ingredients being present.

Shotgun Wedding follows Darcy (Lopez) and Tom (Josh Duhamel), a couple having their destination wedding on an island in the Philippines. Darcy is the farthest thing from a bridezilla as she favored eloping with her fiancé, but he insisted on the perfect destination wedding. Tom struggles with feeling inadequate and uses the wedding to channel his nervous energy, obsessing over every little detail. The perfect day finally arrives, and everything goes to hell when pirates attack the wedding. Now Darcy and Tom need to do everything they can to survive and save their families and relationship.

Despite a premise that lends itself perfectly to an action comedy, Shotgun Wedding never manages to get off the ground. Screenwriter Mark Hammer and director Jason Moore forgot some crucial pieces that make an engaging action romp featuring two people whose romance audiences should believe in at the center. The chemistry between the leads, their onscreen families, and guests needs to be that secret sauce that makes the in-between moments fun, engaging, and entertaining. Shotgun Wedding struggles with that, along with some mediocre action and terrible use of a beautiful locale.

No one can deny that Jennifer Lopez is one of the hardest-working people in the industry, but her ability to pull good projects has become less and less effective. Granted, her acting career hasn’t always produced bangers, but there are classics in the mix that are undeniable due to her charismatic persona and, well, her beauty. Shotgun Wedding attempts to highlight some of the qualities that make her who she is, but they never hit. Nothing about this film is catered to her sensibilities or skill.

The other problem is the lack of a compelling leading man in Josh Duhamel, who gives nothing. There is no charm, no wit, no enjoyment. His acting lacks substance and structure. Nothing really indicates why he or his predecessor, the infamous Armie Hammer, were cast opposite Lopez for this film. Height and conventional good looks don’t make for an effective lead. More casting directors need to realize that merely casting two attractive people as a couple doesn’t automatically manufacture interesting characters and chemistry.

Shotgun Wedding is ultimately a movie about two people who are inexperienced with violence going full Mr. and Mrs. Smith on a group of terrorists and somehow coming away unscathed. The key to making it all funny and entertaining is to have the absurdity of the situation cranked up to an 11. There are some funny bits and running jokes that earn a chuckle, but there is very little that holds one’s attention. It’s bad enough that Lopez is playing a woman named Darcy and that people of color make up the mostly faceless “bad” guys. Still, the thing that torpedoes this whole endeavor is the lackluster script, directing, and, most damning of all, its ensemble cast.

Jennifer Coolidge does what she can to liven up the ensemble, but the characters are all underwritten and boring. Very little makes one believe that Lopez’s character belongs with this group of people. The lack of chemistry between everyone is baffling. While Darcy and Tom are trying their best to survive on the island, the rest of their wedding party is huddled together in a pool, doing nothing. There are no laugh-out-loud moments, no attempt to integrate this cast into the shenanigans, and the villains are flat and predictable.

There are some good moments in Shotgun Wedding. Lopez, Coolidge, and Lenny Kravitz are game and there is a Herculean effort from the trio to do something worthwhile with the script they are given. However, the lesson here is that as movie budgets become grotesquely bloated, studios need to take extra steps to ensure their movies are at the very least good. Clearly, that wasn’t happening here.

Shotgun Wedding begins streaming on Prime Video Friday, January 27. The film is 100 minutes long and rated for language and some violence/bloody images.