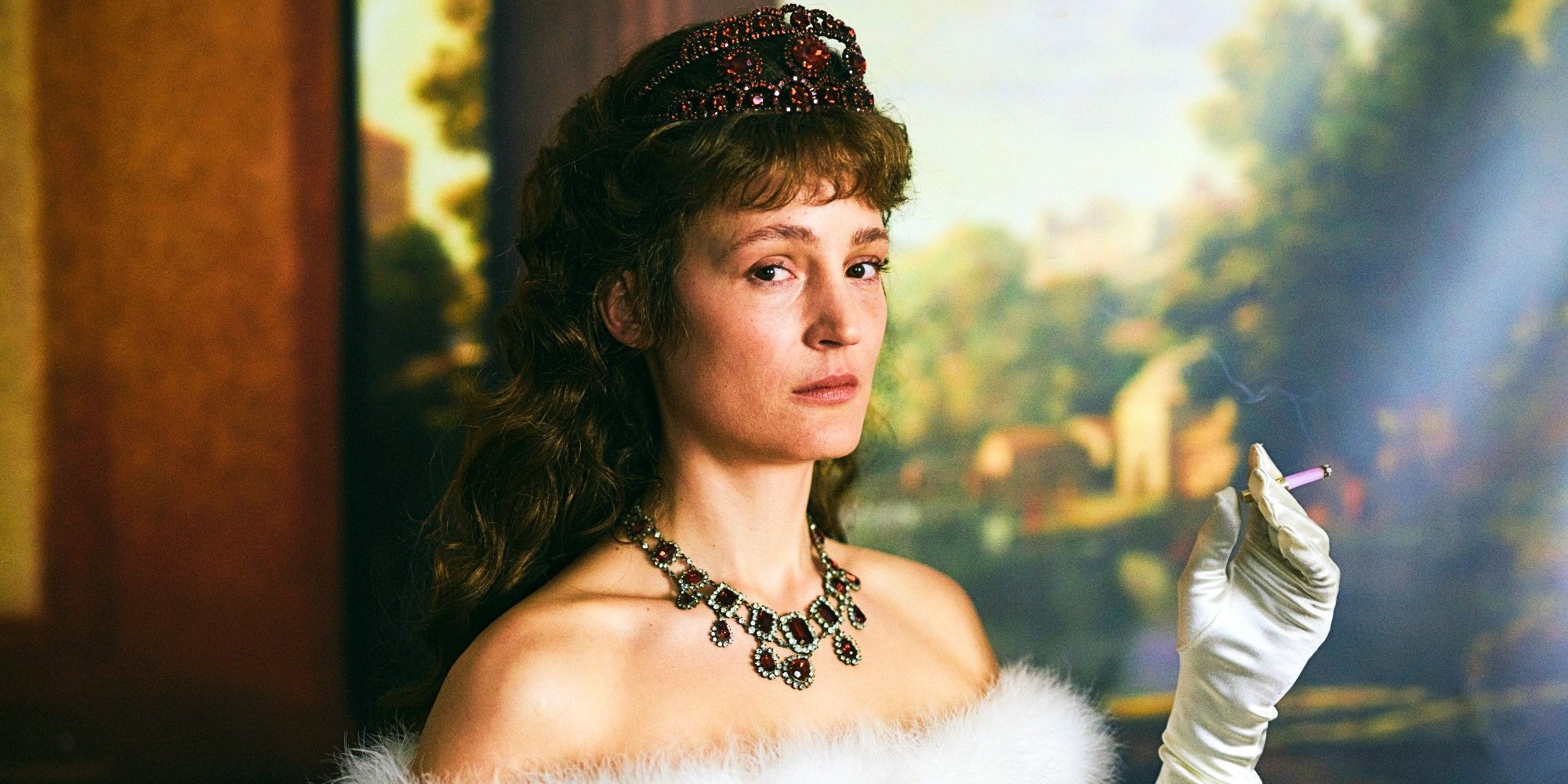 Corsage is carried by Vicky Krieps’ brilliant performance and its willingness to buck genre conventions in favor of a dark and dreamy fairy tale.

“She scares me so much,” a maid says as Corsage begins and cuts to a woman submerged in bathwater. She is Empress Elisabeth of Austria and, when she rises, the two maids beside the bath give her conflicting accounts of how long exactly she was able to hold her breath. The truth doesn’t matter to Elisabeth (Sissi for short), just as it doesn’t matter to writer-director Marie Kreutzer. Corsage is based on the real-life Austrian empress, but beyond the characters in the film, little else seems to be based in fact, and what is blends seamlessly with what isn’t in what feels like a deliberate effort to make the audience question how these kinds of stories are told. Part revisionist history, part unconventional character study, Corsage is carried by Vicky Krieps’ brilliant performance and its willingness to buck genre conventions in favor of a dark and dreamy fairy tale.

Corsage begins in December 1877 and tracks a year in the life of Elisabeth, two decades before her eventual assassination in 1898. Detached from her husband, Franz Joseph I (Florian Teichtmeister), Elisabeth only seems concerned with her daughter Valerie (Rosa Hajjaj) and herself. It is the eve of her 40th birthday, and she is clearly perturbed at growing older, finding little disruptions where she can. At a celebration in the opening moments of the film, Elisabeth feigns a fainting spell in front of the arrival committee. She flirts with her stable boy and forms a (presumably fictional) friendship with Louis Le Prince (Finnegan Oldfield), who is considered the Father of Cinematography. All of this, and more, is a minor rebellion against aging, against the oppressive life she is forced to live, even as history itself tries to catch up with her.

Related: Every Movie Coming To Theaters In January 2023

Krieps, whose star-making turn in Phantom Thread really should have resulted in an Oscar, has chosen a slew of idiosyncratic projects instead of ones that are typical after a breakthrough role. From the M. Night Shyamalan oddity Old to Mia Hanson-Løve’s Bergman Island, Krieps has shown off an incredible knack for character works. She continues that here, inhabiting Elisabeth in a way that feels as if it is reaching back through history while still being distinctly modern. Roles like these have allowed Krieps to perform on her own terms, a quality that she so clearly shares with the empress, albeit with different results.

The rest of the cast dutifully follows Krieps’ lead, from Florian Teichtmeister’s Franz I to Aaron Friesz as the Crown Prince Rudolf. The fact that they, nor any of the other side characters, don’t get much screen time is intentional, even if it does feel like we miss out on some key part of why Elisabeth is the way she is. Some of her interactions with Franz work to rectify this, but it’s the freedom she so clearly feels with people like Louis Le Prince or Bay Middleton (Colin Morgan) that show the side that Kreutzer feels audiences ought to know. That Elisabeth’s son gets in the way of these relationships out of loyalty to a monarchy he knows is declining is just one unfortunate circumstance of Elisabeth’s status.

The ending of Corsage is its most divisive element, if only because it leans so drastically into the alternate history it depicts. Elisabeth may finally get the freedom she desires, but its connection to what comes before it feels tenuous. It is hard to tell if the Empress’ decline is intentional on her part or a symptom of a larger issue, the result of a few different scenes that would veer into spoiler territory if revealed here. The ambiguity feels intentional, but it doesn’t exactly work when the idea of Elisabeth’s agency has been toyed with throughout Corsage.

For the few things that don’t work, though, there is a good amount of Corsage that does. It is an impeccably crafted period piece that feels in kinship with Sofia Coppola’s Marie Antoinette. Krieps is able to communicate a complex interiority in Elisabeth with such small glances (and even fewer words), a testament to Kreutz’s writing and direction, as well as the actress’ own skill, which feels as if she has a lot more to say. In that way, Corsage feels like a beginning for both Krieps and Elisabeth despite the fact that Krieps has been turning in consistently excellent work for half a decade and Elisabeth is long gone.

Corsage released in theaters on January 6. The film is 113 minutes long and is currently unrated.