Kangana Ranaut wraps Emergency, reveals she had to mortgage ‘every single thing’ for the film 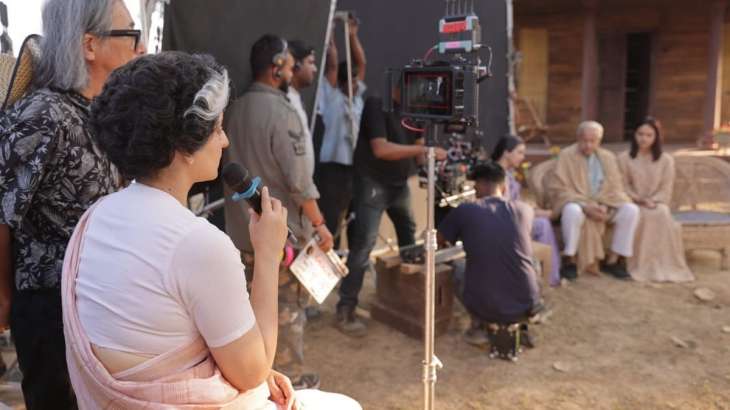 Kangana Ranaut on Saturday announced that she’s wrapped filming on the period drama Emergency, her first movie as solo director, in which she plays former prime minister Indira Gandhi during the tumultuous 1970s. In a post on social media, she hinted about enemies who worked overtime to stop her from making the film and shared that she had to mortgage her properties while making it. Taking to Instagram, Kangana shared a string of BTS pictures from the sets of the film and shared a long note about her experience working on ‘Emergency’.

Kangana Ranaut mentioned, “As I wrap Emergency as an actor today, a tremendously glorious phase of my life comes to its full completion… It may seem I sailed through it comfortably but the truth is far from it. From mortgaging all my properties, every single thing that I owned to being diagnosed with dengue during the first schedule and having to film it in spite of alarmingly low blood cell counts, my character as an individual has been severely tested.”

“I have been very open about my feelings on SM but I didn’t share all this, honestly because I didn’t want people who cared to worry unnecessarily and those who desperately want to see me fall and were doing everything to make me suffer, I didn’t want to give them the pleasure of my pain. At the same time I want to share with you all that if you believe just working hard for your dreams or for what you want is enough, think again because that’s not true…You must work hard that’s given even if you are worthy you will be tested beyond your limits and you mustn’t break,” she added.

Concluding the note, she further stated, “Hold on to yourself till you can … you are fortunate if life spares you but you are blessed if it doesn’t…. if you break and shatter in pieces… celebrate… Because it’s time for you to reborn. .It’s a rebirth for me and I feel alive like never before…Thanks to my tremendously talented team for making it happen for me. P.S all those who care about me please know that I’m in a safe place now … I would have not shared all this if I wasn’t …please don’t worry, I only need your blessings and love.”

The film, directed by Kangana, also stars Anupam Kher, Mahima Chaudhry, Vishak Nair, Satish Kaushik, Milind Soman and Shreyas Talpade in prominent roles. Apart from this, Kangana also has Sarwesh Mewara’s ‘Tejas’, in which she will be seen portraying the role of an Indian Air force pilot. Her film ‘The Incarnation: Sita’ is in pipeline.