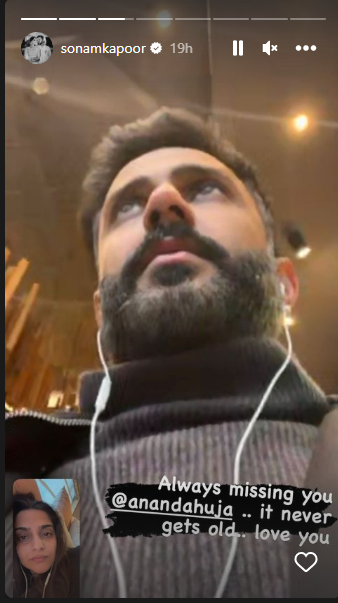 Sonam Kapoor and husband Anand Ahuja are one of the most rock solid relationships around. The duo, who dated for many years remained tight-lipped about their relationship and tied the knot in 2018. In 2022, the couple welcomed their first child, baby Vayu Kapoor Ahuja.

Sonam has often spoken at length about her entrepreneur husband and how he goes out of his way to support her when she is working or travelling for long periods. The two, who often use the hashtag #EverydayPhenomenal for themselves, never leave an opportunity to shower love on each other, both on and off social media.

Recently, Sonam took to her IG handle to share a screenshot of a facetime call between Anand and her, where the two seem to be catching up on each other’s life, while being physically away. The image shows Sonam lying down on a bed, and talking to the husband, who could be seen in black winter wear. Sharing the same, Sonam wrote, “Always missing you @anandahuja…it never gets old..love you.”

Meanwhile, on the work front, Sonam will next be seen in ‘Blind’, directed by Shome Makhija, starring Purab Kohli, Vinay Pathak and Lillete Dubey in prominent roles. The official release date of the film is still awaited.