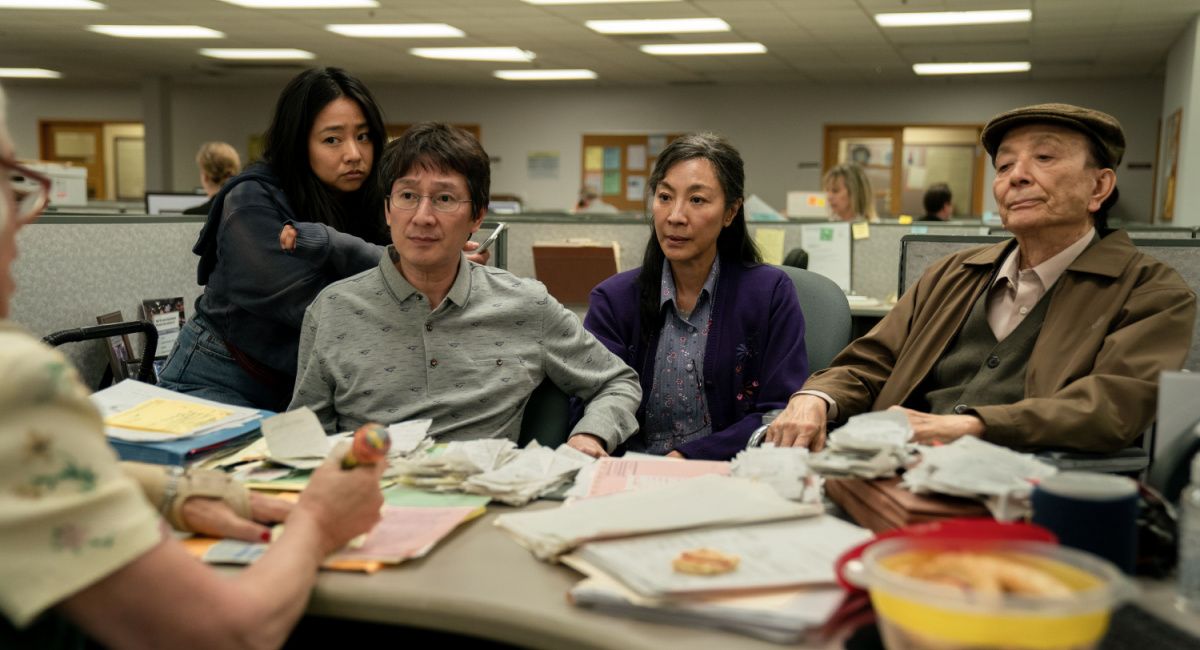 (L to R) Jamie Lee Curtis, Stephanie Hsu, Ke Huy Quan, Michelle Yeoh, and James Hong in A24’s ‘Everything Everywhere All at Once.’

The star-studded affair (albeit slightly less star-studded thanks to the super-spreader event that was the Golden Globes, which saw the likes of Jamie Lee Curtis, Brendan Gleeson and Colin Farrell all laid low with Covid) blends film and TV awards, and in an attempt to keep the running time to a strict three hours (successfully, as it stands) weirdly squashed together certain categories, which meant that the likes of ‘Barry’s Henry Winkler and ‘Abbott Elementary’s Sheryl Lee Ralph ended up taking the stage at the same time, and taking turns to give their speeches one after the other.

That was still better for those in some other categories, such as Cinematography and Best Animated Series, which were burned through in brief on-screen mentions without any of the recipients coming up to accept their trophies.

Hosted by Chelsea Handler, the show had the usual mix of celebrity presenters, memorably Seth Rogen, who joked that the CW, where the awards show was airing, had zero nominations at the ceremony.

It was another good night for the team behind ‘Everything Everywhere All at Once’, which won five awards, including Best Picture, Best Director, Best Supporting Actor for Ke Huy Quan, Best Editing and Best Original Screenplay.

Though the movie’s Michelle Yeoh had been predicted to repeat her run of wins as Best Actress, that award went to Cate Blanchett for ‘Tár’, as the Critics Choice Ceremony had the feel of Everything Wins Something.

Brendan Fraser in director Darren Aronofsky’s ‘The Whale’ from A24.

Other buzzed about movies made do with one win each, such as ‘Avatar: The Way of Water’s effects, and ‘Elvis’ hair and make-up team.

On the TV front, it was a triumphant night for ‘Better Call Saul’, the ‘Breaking Bad’ spin-off enjoying some well-earned respect for its final season as it won Best Drama, Best Actor in a Drama for star Bob Odenkirk and Best Supporting Actor in a Drama for Giancarlo Esposito.

‘Abbott Elementary’ continued to do well, winning two awards, while Jennifer Coolidge was back on another stage, offering another funny speech as she won another trophy for ‘The White Lotus’.

Blending first-timers (such as Jeremy Allen White for ‘The Bear’) and repeat winners (Jean Smart for ‘Hacks’ or Winkler for ‘Barry’), the TV categories, like their movie counterparts also spread the love around various shows.

Here are the film winners…

‘Everything Everywhere All at Once’

Ke Huy Quan, ‘Everything Everywhere All at Once’

‘Glass Onion: A Knives Out Mystery’

Daniel Kwan & Daniel Scheinert, ‘Everything Everywhere All at Once’

Daniel Kwan & Daniel Scheinert, ‘Everything Everywhere All at Once’

Paul Rogers, ‘Everything Everywhere All at Once’

‘Avatar: The Way of Water’

‘Glass Onion: A Knives Out Mystery’

The TV winners can be found below…

BEST ACTOR IN A DRAMA SERIES

BEST ACTRESS IN A DRAMA SERIES

BEST ACTOR IN A COMEDY SERIES

BEST ACTRESS IN A COMEDY SERIES

BEST MOVIE MADE FOR TELEVISION

BEST ACTOR IN A LIMITED SERIES OR MOVIE MADE FOR TELEVISION

BEST ACTRESS IN A LIMITED SERIES OR MOVIE MADE FOR TELEVISION

Ke Huy Quan as Waymond Wang in A24’s ‘Everything Everywhere All at Once.’